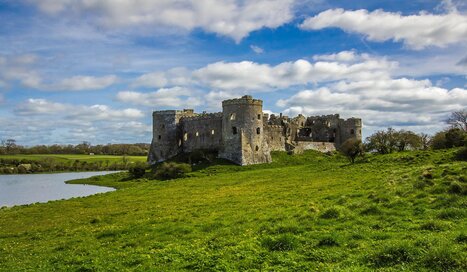 The 4* Dragon Hotel has been one of the most celebrated Swansea Hotels, and a key landmark in Swansea City Centre for over 50 years. Recently, this fully air-conditioned leisure hotel was featured as South West Wales' premier 4-star hotel. Its 106 ensuite bedrooms are of an excellent standard and it also has superb leisure facilities which guests have use of.

Monday Day 1 – Departing your allocated pick-up point, we travel west to Chipping Sodbury where you will have a little free time to explore and purchase lunch. Continuing onto Wales, a visit to the Royal Mint is included. This is the world's leading export mint making coins and medals for an average of 60 countries every year. However, its first responsibility is to make and distribute United Kingdom coins as well as to supply blanks and official medals. Opened by the Queen in 1968 in readiness for the introduction of the decimal coinage, The Royal Mint's headquarters in Llantrisant employs more than 900 people and here they can produce 90 million coins and blanks a week, which equates to almost five billion coins a year. During the guided factory experience you will enter one of the manufacturing areas, to discover how blank pieces of metal are made before being struck to become coins. From a viewing area, you will look into the striking hall where thousands of coins are produced, 24 hours a day. Continuing onto Swansea and your centrally located hotel, dinner is included this evening.


Tuesday Day 2 – Breakfast included. Joined by a local guide, this morning is dedicated to Swansea. There are many things to see in Swansea (and most have free entry) including the Maritime Quarter where you will find the Marina, National Waterfront Museum (a former dock warehouse with modern extension exhibiting industrial and technological displays), Swansea Museum and Meridian Tower. Within ½ mile of the hotel are the indoor market, the remains of Swansea Castle, the Dylan Thomas Centre and the famous Sail Bridge. This curved cable-stayed footbridge, which has the deck supported along only one edge from a sloping mast, has become a landmark in central Swansea. You can purchase lunch before joining the coach with your local guide for this afternoon’s leisurely drive through the beautiful unspoilt scenery of the Gower Peninsula. A fifteen-mile-long finger of undulating sandstone and limestone, Gower (Gŵyr) is a world of its own, pointing into the Bristol Channel to the west of Swansea. The area is fringed by sweeping yellow bays and precipitous cliffs, with caves and blowholes to the south, and wide, flat marshes and cockle beds to the north. Bracken heaths dotted with prehistoric remains and tiny villages lie between along with numerous castle ruins and curious churches. A stop will be in the pretty resort of Mumbles renowned for its iconic Victorian Pier and Lifeboat station with slipway and for the Lighthouse built in 1794. Hotel dinner included.


Wednesday Day 3 – Breakfast included. Today begins with an included relaxing journey on the Gwili Steam Railway (11-1pm) with refreshments. You will travel in old fashioned carriages through the Gwili Valley on this living reminder of a Great Western Railway branch line set in the breath-taking Carmarthenshire hills. The trip down memory lane starts at Bronwydd Arms Station, and the steam train follows the route, originally taken by the Carmarthen to Aberystwyth line to a delightful halt at Danycoed.
This afternoon’s included excursion is to the National Botanic Garden of Wales where lunch can be purchased. This garden has an amazing collection of over 8000 different plant varieties, spread across 560 acres of beautiful countryside. There is a stunning range of themed gardens that appeal to a wide range of visitors, from those who just love the sight and smells of flowers to those who want to know about medicinal plants or the latest DNA research into plant evolution. There is also the world’s largest single spanned glasshouse, designed by Lord Foster, that has the best display of Mediterranean climate zone plants in the Northern hemisphere, a butterfly house and the new British Bird of Prey Centre (entrance included). Returning to Swansea, dinner is included at the hotel.


Thursday Day 4 – Breakfast Included. We first travel to Dinefwr (NT). This national nature reserve, historic house and 18th-century landscape park, enclosing a medieval deer park has been a magical land of power and influence for more than 2,000 years. The powerful Lord Rhys held court at Dinefwr and influenced decisions in Wales. The visionaries, George and Cecil Rice designed the superb 18th-century landscape that you see today. A visit of the 'hands-on' Newton House offers an atmospheric experience from circa 1912. Exhibitions on the first floor tell Dinefwr's story and inspire exploration of the castle and park. Lunch can be purchased before continuing on to Pant Station in Merthyr Tydfil, the boarding point of the Brecon Mountain Railway. Travel in one of the all-weather observation coaches behind a vintage steam locomotive through beautiful scenery into the Brecon Beacons National Park, along the full length of the Taf Fechan Reservoir to Dol-y-Gaer on one of the most popular railways in Wales (90 minutes duration). At Pontsticill you may alight the train and visit the Café & admire the view across the water to the peaks of the Brecon Beacons. On your return to Pant, you might like to visit the workshop where old steam locomotives are repaired before returning to the hotel where your evening meal is included.


Friday Day 5 – Breakfast included. Today we travel west to Pembrokeshire beginning with a guided tour of Carew Castle, followed by free time when you might choose to visit the Tidal Mill. With a rich history spanning over 2,000 years, this attraction tells of knights of the realm, kingmakers, Elizabethan intrigue and Civil War devastation. Set in a stunning location overlooking a 23-acre millpond, the Castle is one of the most architecturally diverse in Wales; from the west a Norman fortress, yet from the north a splendid Elizabethan mansion. You will see the beautifully carved Celtic cross which stands at the entrance to the Castle grounds which displays on four sides, lovely knot-work and key-pattern carvings.
We conclude today with a visit to the coastal town of Tenby – originally called Dinbych y Pysgod in Welsh or ‘little town of fish’. Originally established by The Normans as a fortified town, most of the old town walls remain enclosing the medieval town behind them. The castle that defended Tenby was built on Castle Hill but only one small keep tower remains of that. Inside the old town walls, narrow cobbled streets and medieval houses add to Tenby’s charm. There will be free time here before returning to the hotel for dinner.


Saturday Day 6 – Breakfast included. Checking out of the hotel, we retrace our steps homeward stopping at Tredegar House (NT). Before visiting the house, you will see its three modest formal gardens, each with their own distinctive characters and story to tell. The House (free flow visit) is one of the architectural ‘Wonders of Wales’ and one of the most significant late 17th-century houses in the British Isles. Situated within 90 acres of beautiful gardens and parkland, this delightful red brick house provides an ideal setting. For more than 500 years the house was home to one of the greatest Welsh families, the Morgans and later Lords Tredegar. The Morgan family owned more than 40,000 acres in Monmouthshire, Breconshire and Glamorgan at the end of the 18th Century. Their lives impacted on the population of south-east Wales socially, economically and politically and influenced the heritage of the area. Lunch can be purchased before continuing homeward (with a comfort break), returning to your original departure point(s) later today.