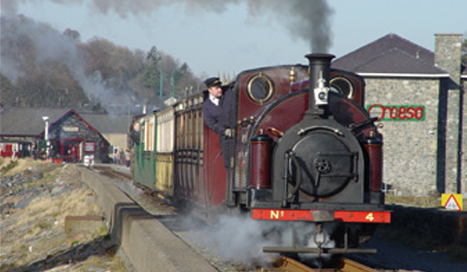 This tailor-made package includes executive coach travel throughout the holiday and from three nights’ accommodation on a half board basis at a 3* or 4* hotel in North Wales to suit your group’s requirements. The content of your preferred itinerary will be discussed with you at the time of enquiry.

Day 1 - Ludlow’s medieval street pattern survives almost intact, along with many ancient properties including a magnificent ruined castle and one of the largest parish churches in England. Modern buildings are few and far between in the town centre, whose streets are lined with medieval and Georgian buildings and there are almost 500 listed buildings in the town.

Day 2 - Caernarfon Castle, a brute of a fortress whose pumped-up appearance is unashamedly intimidating. By throwing his weight around in stone, King Edward I created what is surely one of the most impressive of Wales’s castles. Bodnant Gardens (NT). This world-famous garden is noted for its botanical collections. Marvel at plants from all over the world grown from seed and cuttings collected over a century ago on plant-hunting expeditions. Created by five generations of one family, this 32-hectare (80-acre) garden is superbly located, with spectacular views across Snowdonia. With expansive lawns and intimate corners, grand ponds and impressive terraces, a steep wooded valley and stream, as well as awe-inspiring plant collections, there are continually changing glorious displays of colour.

Day 3 - Llandudno is the largest resort in Wales, uniquely situated between the Great and Little Ormes. Llandudno has kept its Victorian and Edwardian elegance and splendour, despite its modern attractions. Its famous Great Orme Tramway has been delighting visitors since it opened on July 31st 1902. An engineering marvel of its age, it is still the only cable-hauled tramway still operating on British public roads and one of only three surviving in the world. At the Halfway Station exhibition, discover the fascinating funicular tramway - then enjoy the spectacular ride to the top. Re-live the experience of travel more than 100 years ago in the original tramcars - each named after a Saint.
Conwy Castle. A distinguished historian wrote of Conwy, 'Taken as a whole, Conwy's incomparably the most magnificent of Edward I's Welsh fortresses'. In comparison to other great Edwardian castles it is also relatively straightforward in design, a reflection of the inherent strength of its siting. The views from the battlements are breath taking, looking out across mountains and sea and down to the roofless shell of the castle’s 125ft Great Hall. It is from these battlements that you can also appreciate Conwy's other great glory, its ring of town walls which are over three quarters of a mile long and guarded by no less than 22 towers. The town itself is also well worth visiting.

Day 4 - ‘The Heart of Snowdonia’ and the town of Betws-y-Coed is probably North Wales' most popular inland resort. This is where the River Conwy meets its three tributaries flowing from the west, the Llugwy, the Lledr and the Machno. Much of the town was built in Victorian times and it is the principal village of the Snowdonia National Park. It has a wonderful setting surrounded by dense woodland and magnificent mountain country. The beauty of the area is enhanced by cascading waterfalls, hill-top lakes, river pools and ancient bridges.
Portmeirion - You might be forgiven for thinking you were in southern Italy and not North Wales! This fascinating fantasy village built by Sir Clugh Williams-Ellis between 1925 & 1972 is set in sub-tropical gardens and woodlands and its beauty almost defies description.
The Ffestiniog Railway travels from Porthmadog to Blaenau Ffestiniog. This working narrow gauge line is one of Wales' most popular 'Great Little Trains', once hauled slate to Porthmadog's quayside for shipping worldwide and today it is a passenger line. This 13.5 mile trip takes in wonderful Snowdonia scenery.

Day 5 - Llangollen is steeped in myth and legend. As with so many ancient Welsh towns, it takes its name from its founding Saint. The famous Dee Bridge was built by Bishop Trevor of Trevor Hall in I345 and today is a scheduled ancient monument albeit that it was widened in the 1960’s to accommodate modern traffic. Llangollen became important because of its prominent position on the main London to Holyhead coaching road which was improved by Thomas Telford from 1815 and continued for some 15 years. The Llangollen Canal was also constructed around this and combined to bring considerable immigration into Llangollen during the early part of the 19th century. Walk or take a canal trip walking across the Pontcysyllte Aqueduct for splendid views.