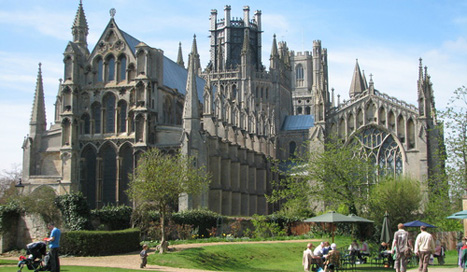 This tailor-made package includes executive coach travel throughout the holiday and from three nights’ accommodation on a half board basis at a 3* or 4* hotel in Suffolk to suit your group’s requirements. The content of your preferred itinerary will be discussed with you at the time of enquiry.

Day 1 - Audley End (EH) takes its name from Sir Thomas Audley, Henry VIII's Lord Chancellor. This magnificent house was built to entertain royalty, and includes a Victorian Service Wing, complete with kitchen, laundries and a dairy.  There are beautiful grounds to explore, including an impressive formal garden and the working Organic Kitchen Garden. The new stables experience includes an exhibition where you can find out about the workers who lived on the estate in the 1880’s, the tack house and the Audley End fire engine. The city of Cambridge is home to the famous University, carols in King's College Chapel and punting on the river Cam. It is a compact cosmopolitan city with outstanding architecture, both old and new. The beauty of its ancient centre is preserved with its walk-able medieval streets, college courts, gardens and bridges.

Day 2 - Tour of The National Stud in Newmarket. This is the showcase for British Thoroughbred breeding and comprises of over 500 acres of prime pastureland on the edge of Newmarket, the HQ of racing in the UK. Its facilities include accommodation for eight stallions and up to 200 mares in nine separate yards. What you see will depend on the time of year, but each tour takes in the superb Stallion Unit, with an opportunity to view the stallions in residence, plus the Foaling Unit and Nursery Yards. You will see mares and foals in their paddocks and miniature Shetland ponies. Mildenhall is a pretty mediaeval town with strong links to the US air force, with 2 air bases on its doorstep. The town boasts an historic Market Cross and pump, whilst St Mary's church is one of the finest in Suffolk. The town's museum holds a replica of 4th century Roman silver tableware discovered in the area in 1942. The City of Ely is full of charm and beauty and is home to one of the most magnificent cathedrals in England. Nestled in the Fen countryside, this small city is rich in history, charm and beauty and it is thought that the name Ely is derived from the Isle of Eels, when Ely was surrounded by water and marshland. Ely Cathedral is one of England's most beautiful and largest Cathedrals. Known locally as the 'Ship of the Fens' it is famous for its unique Octagon tower, which when lit can be seen for tens of miles. The Cathedral is also home to the only national museum dedicated to Stained Glass. Ely's most famous historical resident was Oliver Cromwell who in 1636 inherited a large estate about two miles outside Ely at Stuntney. Ely has a beautiful waterside area, which is an attraction within itself, where you can explore the many cafes and antique shops.

Day 3 - Bury St Edmunds, one of the hidden gems of Suffolk is probably most famous for the ruined Abbey that stands near to the town centre, surrounded by the Abbey Gardens. Aldeburgh is on the Suffolk Coast and Heaths, which is designated as an Area of Outstanding Natural Beauty. Visit the Red House where Benjamin Britten and Peter Pears lived and worked together for almost thirty years. The house itself has been kept largely as it was and across the courtyard is the library that Britten and Pears added in 1963. Today, the library houses the Foundation's archive collection, visited by researchers from around the world who come to study in the reading room. Snape’s Concert Hall including a Backstage Guided Tour of the hall built in the mid 19th century, his 832-seat Concert Hall began life as a malt house and was officially opened in 1967 by HM Queen Elizabeth II. Lavenham is one of the best preserved medieval villages in the UK, boasting some 320 listed timber framed buildings, many of them protected by English Heritage. This is a unique village created some 750 years ago by Henry III when he granted Lavenham market status. Traders flocked to the village to take advantage of its thriving wool trade, and by 1524 Lavenham was ranked the 14th richest town in the country, thanks to the famous Lavenham Blues cloth. The boom in Lavenham didn't last, as Flemish weavers settled in Essex and began to compete with indigenous weavers. In the 16 century, Henry V111 imposed heavy taxes wherever he could to finance wars against France, so the money was quickly drained from the village. Although Lavenham is the leading Medieval village in the UK, it also offers some other types of architecture too, making this small village even more appealing.

Day 4 - Sutton Hoo (NT) is a hauntingly beautiful 103-hectare estate, with far-reaching views over the river Deben and is home to one of the greatest archaeological discoveries of all time. With your guide, walk around the ancient burial mounds and discover the incredible story of the ship burial of an Anglo-Saxon king and his treasured possessions. Come face to face with your ancestors and explore the award-winning exhibition, the full-size reconstruction of the burial chamber, stunning replica treasures and original finds from one of the mounds, including a prince's sword.