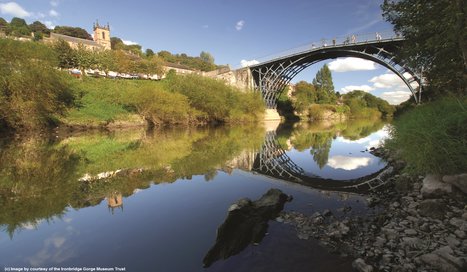 This tailor-made package includes executive coach travel throughout the holiday and from three nights’ accommodation on a half board basis at a 3* or 4* hotel in Shropshire to suit your group’s requirements. The content of your preferred itinerary will be discussed with you at the time of enquiry.

Day 1 - Bourton on the Water is regularly voted as one of the prettiest villages in England. It has more than its share of traditional Cotswold houses and cottages, many of them three hundred years old, some dating back to Elizabethan times four hundred years ago. The Cotswold Motoring Museum will take you on a journey through the 20th century. Though the main focus is on motoring, this museum is also full of the everyday paraphernalia that made motoring so popular including picnic sets from the 1920’s, caravans, radio sets, gramophones and knitted swimsuits.

Day 2 - Ironbridge and its museums. The Museum of the Gorge is locatedin the Old Severn Warehouse which is a short walk from the Iron Bridge. See what the Gorge was like in 1796 with the help of a giant 12 metre long model. Spot a Royal carriage crossing the Iron Bridge, the cargo on a Severn Trow and a tiny figure toiling in a coalmine. Understand more about the area's history and discover why the Gorge was made a World Heritage Site during a short film.  Jackfield Tile Museum -  wander through the original gas-lit trade show room, galleries and period room setting, where you will be able to see, touch and even walk on magnificent British tiles. Galleries show exquisite examples of individual tiles and period room settings depict various locations that would have been decorated with tiles. Blists Hill - meet the Victorians in this recreated Victorian town. Costumed staff will welcome you warmly and you will be given a fascinating insight into how life was lived in Victorian Times.  Exchange your money in the Bank; admire the goods in the Grocers, Bakery and Sweet shop. Find out about curious remedies in the Chemist and see the printer and candle-maker in action.

Day 3 - Shrewsbury is a town packed with timber-framed black & white buildings, steep narrow streets and alleyways. It boasts over 600 listed buildings including the Castle, now a regimental museum and the world-famous Shrewsbury Abbey, home of the fictional Brother Cadfael. Charles Darwin was also born and educated in Shrewsbur.  40 minute river Severn cruise with live commentary learn about Shropshire's county town which was founded by the Saxons and most extensively developed by the Tudors. Stokesay Castle EH is the finest and best preserved fortified medieval manor house in England. Set in peaceful countryside near the Welsh border, the castle, timber-framed gatehouse and parish church form an unforgettably picturesque group. Ludlow is a thriving market town perched on a cliff above the River Teme. It is surrounded by the unspoilt and beautiful hilly countryside of south Shropshire and the Welsh border country, known as the Welsh Marches.  Ludlow town centre's layout and architecture is evidence of the 900 year old Norman planned town’s history, with over 450 listed buildings, of the 650 in South Shropshire. Grade I listed buildings in Ludlow include Ludlow Castle, St Laurence’s Church & the Feathers Hotel.

Day 4 - Weston Park House & Gardens is one of the most welcoming stately homes, with as much character as any English castle, and it has as many stories as any royal home. It has beautiful gardens, architecture and history  and 1,000 acres of Capability Brown Parkland was gifted to the nation in 1986. The Royal Air Force Museum Cosford houses one of the largest aviation collections in the United Kingdom, with over 70 historic aircraft displayed in three wartime hangars on an active airfield and the collection spans nearly 80 years of aviation history.

Day 5 - The Severn Valley Railway is a full-size standard-gauge railway line running regular steam-hauled passenger trains 0 between Kidderminster in Worcestershire and Bridgnorth in Shropshire, a distance of 16 miles. With there being few roads in the Severn Valley, some of the views are only visible from the Railway and the scenery is varied and largely unspoiled, punctuated by the quaint 'olde worlde' charm of country stations. Bewdley has been described as the most perfect small Georgian town in Worcestershire. Its strongly defined character is based upon a collection of fine historic buildings and a series of landmark set pieces which include; Thomas Telford's Bridge 1798 , the imposing St. Anne's Church.