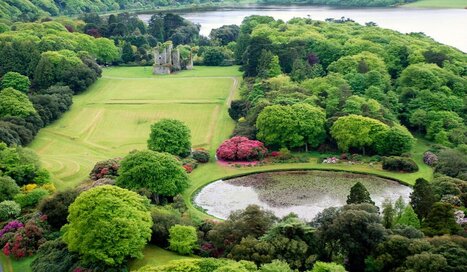 This tailor-made package includes executive coach travel throughout the holiday and from three nights’ accommodation on a half board basis at a 3* or 4* hotel in Scotland to suit your group’s requirements. The content of your preferred itinerary will be discussed with you at the time of enquiry.

Our suggested itinerary could include:

Day 2 - Logan Botanic Garden is Scotland’s most exotic garden, famous for its botanical treasures from South and Central America, Southern Africa and Australasia, some of which are rarely seen in the United Kingdom. It is one of 3 regional gardens of the Royal Botanic Garden Edinburgh and is a breath taking celebration of the world of plants. Logan’s Walled Garden is a showcase for brilliant blooms and it’s ablaze with colour throughout the year. The garden’s subtropical character is at its most obvious from June to September when fuchsias, hebes, hydrangeas and colourful borders filled with mostly wild species break out in bloom. With its backdrop of cabbage palms, Chusan palms and tree ferns the atmosphere on a sunny day is truly tropical. Hill Cottage SGS is a half-acre cottage garden sitting amongst glorious scenery with marvellous views over the hills and down to the coast. This is mostly a cottage garden with a large natural rockery, small pond and vegetable plot. Damnaglaur House SGS where the owners have totally transformed the garden, putting in a series of ‘semi-terraces’ and, following the planting of wind-defeating shrubs have introduced many special herbaceous plants and trees. Just short of half an acre, it slowly evolved into one which feels substantially larger because of its design – the gravel paths weave their way through to hidden corners to come upon countless gems. The views from the garden are stunning, down to Drummore, across Luce Bay and, in the distance, the Galloway Hills. An archway, arbour and pergola give extra height for the planting. Seating around the garden gives visitors a chance to sit and enjoy their surroundings, especially close to the pond, with its numerous fish and trickling waterfall.

Day 3 - Glenwhan Gardens is filled with seasonal blooms, exotic plants and rare species. Described as one of the best newly created gardens, the story of its development is certainly inspiring. Thirty six years ago there was nothing but bracken, gorse and the odd willow but careful planting has created a 12 acre garden, filled with glorious collections of plants from around the world. Today, the gardens are focused around several small lakes. Castle Kennedy Gardens is situated on an isthmus between two lochs and is one of Scotland’s finest gardens, set in 75 acres and offers spectacular flowering plants and exotic trees, to beautiful scenery, sculptured landforms, magnificent walks and popular bird hides. Originally laid out by the 2nd Earl of Stair in the 1730’s they are famous for their rhododendron displays.

Day 4 – Craichlaw SGS is a formal garden with herbaceous borders around the house. Set in extensive grounds with lawns, lochs and woodland. A path around the main loch leads to a water garden returning past a recently planted arboretum in the old walled garden. Cally Gardens with over 4,000 perennials, the borders at Cally are not only stock beds and trial grounds for the nursery but a magnificent display for visitors. There is plenty of interest throughout the year, with good collections of Helleborus and species Paeonia in spring and early summer, Geranium at mid-summer, and Agapanthus, Kniphofia and Crocosmia in late summer and autumn. Outside of the walled garden there are woodland plantings including large areas of Meconopsis, the Himalayan blue poppies, which love the conditions here.

Day 5 – Dalemain Mansion & Historic Gardens. Discover and enjoy four centuries of House Architecture, five acres of celebrated gardens, historic parkland and home-made food served in the Medieval Hall Tearoom. Specialist tours are available including: A House Tour including parts of the house not normally open to the public, A Garden Tour going behind the scenes into the working parts of the garden. The gardens have many rare plants and over 100 old-fashioned roses. Near the fountain behind the house stands a Greek Fir, the biggest of its kind in the UK. There are also some old Walnut trees, some fine Spanish chestnuts and a 200 year old Tulip tree.