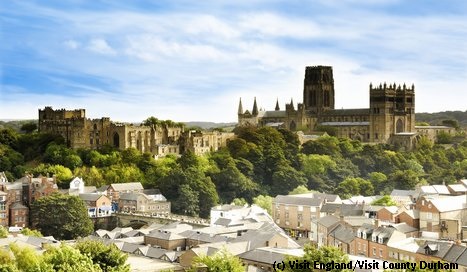 Destination of the Month - County Durham & The City of Bishops

Looking for history, heritage and stunning countryside then Durham is the right location. Delve into Durham’s history and see the past come to life at award-winning attractions and events. Durham is an amazing city, small in size but big on impact. County Durham is a sweeping emerald canvas with breath taking dales, a dramatic coastline and a vibrant city at its heart.

Whether you're looking for a relaxing spa break, a round of golf or prefer walking, cycling or horse riding, there's something for everyone to enjoy during a visit to Durham.

County Durham is unique, as for many centuries it was a virtually independent state ruled not by the king, but by powerful `Prince Bishops', who were more or less the `Kings of County Durham'. In order to really understand the unique history of County Durham we must first go back into Anglo-Saxon times, to a period long before England or Scotland existed, when Great Britain was not one kingdom like today, but several kingdoms spread throughout the land. One of the largest and most powerful of the Anglo-Saxon kingdoms was Northumbria which extended from the Humber to the River Forth, making up almost a third of the entire mainland of Britain.

Today this history can be seen throughout the County with some of the notable attractions being:
• Durham Cathedral and Durham Castle are part of the UNESCO World Heritage Site and together form one of the most stunning city panoramas in Europe. The site's architectural importance lies in the fact that Durham Cathedral and Castle are among the greatest monuments of the Norman Conquest of Britain. The site is also outstanding because of its political history: the Castle and Cathedral reflect the unique status of the Prince-Bishops of Durham.

• Auckland Castle is a symbol of power and authority, built as one of the primary castles and hunting lodges of the Prince-Bishop of Durham. Positioned high above the meandering River Wear, Auckland Castle offers commanding views of the surrounding countryside. Granted exceptional powers by Norman kings - is home to paintings by 17th Century Spanish master painter Francisco de Zurbaran. The castle is also home to Europe’s largest private chapel and its State Rooms provide some of the finest Georgian Gothic architecture in the country. The entire castle, its grounds and the adjacent town centre of Bishop Auckland are currently being re-developed to create a heritage destination of distinction with international importance.

• The Bowes Museum is a building as impressive as the exhibits within and the story behind the museum is just as fascinating. Built in the 19th Century by husband and wife John and Josephine. Bowes houses collections of fine and decorative arts and has three floors of galleries and twenty acres of gardens and parkland.

• Beamish Museum is one of the largest open-air museums in the UK. Explore this ever fascinating story with costumed site guides that bring to life the hard times and good times, the wash days and working days and the long-forgotten pastimes of yesteryear. Explore the 350-acre site by open-top tram. Try some treats in the sweet shop or the bakery in the 1900’s town, stroll through an 18th Century Georgian landscape towards Pockerley Old Hall and if the Steam Elephant on the Pockerley Waggonway is running, then hop aboard this authentic steam train experience taking in the iconic sights and smells of Britain’s early railways.

• The Mining Art Gallery in Bishop Auckland showcases some of the artistic skills of Durham coal miners Tom McGuinness (1926-2006) and Norman Cornish (1919-2014). Their remarkable artwork captured the dark world of the mines which shaped men into ‘industrial gladiators’. The gallery forms part of a wider restoration project in the area.

• Kynren is an evening spectacle held between the end of June and mid-September. This live outdoor performance brings history to life. It is a whistle-stop tour of 2000 years of British history through an extravaganza of music, drama and fireworks (and even a gaggle of geese)!

• Raby Castle is a magnificent attraction which provides a fascinating insight into more than 600 years of history. Raby was built by the mighty Nevills in the 14th Century and is one of the finest and best-preserved medieval castles in North East England. Cecily Neville became the Duchess of York, was born at Raby Castle in 1415. She was the mother of two English kings, Edward IV and Richard III so assured Raby’s place in national history. With its fortress-like exterior and stately home interior, privately owned Raby Castle is a two-in-one experience. State room splendour contrasts vividly with the simplicity of a servant’s bedroom and the austerity of the servants’ hall.

• Medieval Crook Hall and Gardens in Durham City also provide a tranquil oasis in Durham City. A 13th Century manor house is surrounded by quintessentially English themed gardens including the Cathedral Garden, maze and hidden spaces that lie within the Secret Walled Garden.

• Durham University’s Botanic Garden is a must see for gardening groups and green-fingered visitors. Enjoy winding footpaths which lead through the flora of such far-flung places as Japan, Australia and North America. Visit the glasshouses and discover weird and wonderful plants from a tropical rainforest to desert cacti.

For more information on our group holiday package to  Durham and the North East, contact our expert holiday team to discuss your group’s requirements.