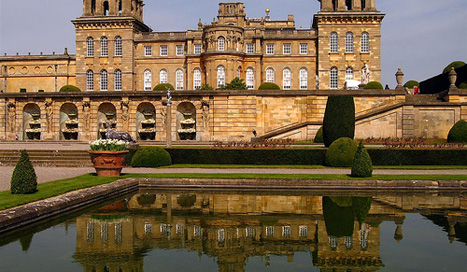 This tailor-made package includes executive coach travel throughout the holiday and from three nights’ accommodation on a half board basis at a 3* or 4* hotel in the Cotswolds to suit your group’s requirements. The content of your preferred itinerary will be discussed with you at the time of enquiry.

Day 1 - Blenheim Palace is a monumental country house in Oxfordshire and is the residence of the Duke of Marlborough. It is the only non-royal non-episcopal country house in England to hold the title of palace. It has 200 acres of Capability Brown landscaped parklands and also the Temple of Diana, where Churchill proposed to his future wife Clementine. Woodstock and its historic honey-coloured streets are as lovely as any found in the Cotswolds. Explore the interesting boutiques, unique art galleries and antique shops. The Oxfordshire Museum in the heart of town tells the story of the ancient county & its natural history and houses the amazing Stonesfield Embroidery which was made in the 18th century by the women of a wealthy local family, among other local treasures.

Day 2 - Hidcote Manor Garden (NT) was originally owned and created by Major Lawrence Johnston and in 1907 when he first acquired the property, there was no garden at all, just a few fine trees. It has been said that it must have taken immense optimism, imagination, skill and energy, not to mention foresight, to create the magnificent garden which is Hidcote today. Winchcombe is famous for its beautifully honey coloured stone buildings dating from the 16th century surrounding Sudeley Castle, which has a long royal history with this lovely Cotswold town.  The 2 museums here give a history of the town and of railway and police memorabilia. Another royal link in the local church is the displayed altar cloth worked by Catherine of Aragon, the first wife of Henry VIII.  Sudeley Castle and its award-winning gardens spans over a thousand years and contains many varied tales of royal associations, wars and periods of neglect and subsequent restoration. Sudeley’s glorious gardens are amongst the very best in England, from the centre piece Queens' Garden, billowing with hundreds of varieties of old fashioned roses, to the Herbal Healing Garden.

Day 3 - Bourton-on -the-Water is often referred to as the ‘Venice of the Cotswolds’ because the river Windrush which runs through the centre. The combination of this clear sparkling water and the attractive low bridges crossing it, create a charming scene. Stow on- the-Wold is the highest settlement in the Cotswolds at 800 feet, situated between the valleys of the Dickler and the Evenlode. Stow's large market square is a gem and the focus of most activity in the town. The surrounding houses, shops and inns, in mellow Cotswold stone, represent a pleasing blend of styles, mainly from the 17th and 18th centuries. Snowshill Manor (NT) is full to the brim of Charles Wade's collection from all over the world and the charming cottage style garden is set in 2.5 acres and is organically run & has stunning views. Broadway is often referred to as the 'Jewel of the Cotswolds' and the 'Show Village of England' because of its sheer beauty and magnificence. Broadway was the inspiration to a number of writers and artists and today is crammed with some of the country's best art galleries.

Day 4 - Tewkesbury epitomises ancient medieval England with its black & white timber framed buildings, pretty streets, narrow alleyways and many nooks and crannies to investigate. Whilst here you could visit the famous Norman Abbey, take a river cruise on the Severn or Avon or visit one of the many history museums.

Day 5 - Burford is an historic market town set in the hills of the Windrush Valley, which fans out from a wide High Street with its superb 17th & 18th century buildings and runs steeply down to the medieval bridge over the River Windrush.