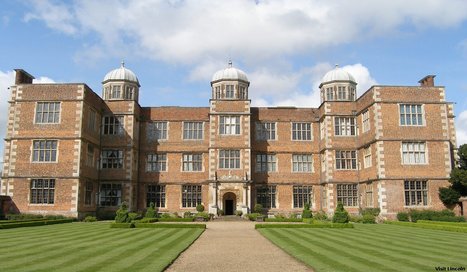 Destination of the Month - Historic Lincolnshire

This is the second largest county in England, yet one of the least populated.

It is an enticing mix of rolling hills (The Wolds), flat fenlands and sandy coastline stretching from the Humber in the north to the Wash in the south. Nestled between these diverse landscapes are some of the prettiest and most scenic towns and villages in the country. From street markets to Michelin starred restaurants, air history museums to golf courses, nature reserves to medieval churches and cathedrals, Lincolnshire has something for everyone.

The Wolds
Lying in the north-eastern quarter of the county, mid-way between Lincoln and the coast, the Lincolnshire Wolds were designated an Area of Outstanding Natural Beauty (AONB) in 1973. Covering an area of 558 sq km and comprising of chalk uplands and streams, they contain the highest ground (168m) in eastern England between Yorkshire and Kent. Of archaeological importance, the area has provided evidence of habitation dating from around 2000 BC.

The Fens
Comprising of 400,000 hectares, the area known as the Fens covers Lincoln and Boston in the North, Cambridge to the South and Peterborough to the West. This flat, treeless terrain reclaimed from the marshes which once covered the area, is one of the most agriculturally productive areas of UK.

The Coast
Discover a coast where sloping sand dunes embrace mile upon mile of golden sands, a place where nature thrives. It offers one of the best places in Britain to see breeding grey seals and annually around a million birds from across the globe migrate along its sandy shoreline. Stretching along the coast from Sandilands to Chapel St Leonards and inland to Hogsthorpe, Mumby, Anderby and Huttoft, the Lincolnshire Coastal Country Park has stunning sandy beaches, wildlife packed nature reserves and an extensive network of public rights of way.
The seaside towns of Skegness & Mablethorpe are also firm favourites.

Market Towns & Villages
Stunning locations, unique characters, charming towns, heritage and fabulous food sums up the picturesque historic market towns and village hamlets. Whether you are looking for an exciting adventure, a gastronomic holiday, a romantic getaway, or just to relax and enjoy the peaceful beauty of the countryside, Lincolnshire’s market towns and villages are the perfect retreat.

Lincoln City
Lincoln offers a unique heritage city experience. The city is crowned by Lincoln Cathedral, one of Europe’s finest examples of Gothic architecture which sits across a picturesque cobbled square from Lincoln Castle. The building of the Castle, as with the Cathedral, was commissioned by William the Conqueror in the 11th Century, so there is a wealth of history and heritage to discover there. It also contains one of only four remaining original copies of Magna Carta. To be found in the underground vault in the Castle. Explore the area’s history in museums and attractions across the city – most of which are free – including The Collection, the Museum of Lincolnshire Life and Lincoln Guildhall. The best way for an overview of the city is from the top deck of the sightseeing open-top bus where live commentary from friendly guides will reveal Lincoln’s secrets and stories.
The remains of Lindum Colonia, the Roman City of Lincoln founded in the first century AD, can still be seen throughout the city by following the Roman Trail. Lincoln isn’t all about heritage though, there is a vibrant food & drink scene. The Brayford Waterfront is an ideal place to enjoy a meal or drink with its stunning waterfront views.

Louth
This is the ‘Capital of the Lincolnshire Wolds’ and home to Lincolnshire’s last remaining cattle market. The town is dominated by St James’ Church with its 95m high spire. The building dates back to the 15th Century and was at the forefront of the Lincolnshire Risings in 1536. Alfred Lord Tennyson spent several years in attendance at the town’s Grammar school before returning to the family home at Somersby.

Woodhall Spa
Once regarded as one of the most beautiful villages in Lincolnshire, this delightful spa town still retains a feeling of Edwardian gentility. Step back in time at the Woodhall Spa Cottage Museum, created to preserve the rich history of the village. Visit the Petwood Hotel, originally the home of the famous 617 Dambusters Squadron, where memorabilia from the squadron is on display in the Dambusters Bar. Woodhall Spa is often hailed as the ‘Home of English Golf’ following the establishment of the National Golf Centre in 1995. Budding golfers can tee off on its Championship level golf course, ranked 25th in the Golf World magazine’s World Top 100 Golf Coures. Deep in the pine forest is the ‘Kinema in the Woods’, the UK’s only fulltime cinema still using rear projetion.

Boston
Here you will find a wealth of fascinating history and heritage, a great selection of shops and places to eat and a stunning market place with vibrant markets. Even after 700 years, travelers visiting the vibrant town of Boston are still amazed by the size and grandness of The Boston Stump. St Botolph's Tower reaches 90m towards the heavens, an outstanding monument to medieval stone masons. Look inside at the memorials to some of Boston's famous sons, and its American connections. Visit the Boston Guildhall where the Pilgrim Fathers were imprisoned and the history of Boston is brought to life.

Stamford
Magnificent Georgian architecture, niche shopping, beautiful riverside meadows and a vibrant Arts Centre make this a must see. It is the most complete stone town in England with whole streets unchanged over the centuries and 600 listed mellow limestone buildings. England’s first urban conservation area is the perfect setting for a Georgian Festival (biennial) with events, markets, a costume ball, military enactments and horse carriage rides.

ATTRACTIONS OF INTEREST
• 17th Century Woolsthorpe Manor (NT) was the birthplace and family home to Isaac Newton. It was here, years that undertook some of his most revolutionary maths and physics. Open to visitors, you can see the apple tree in the orchard which inspired his theory of gravity.
• Doddington Hall is a privately owned fine late Elizabethan Mansion with stunning gardens. Over 400 years of unbroken family occupation has resulted in fascinating collections of furniture, weaponry, paintings, ceramics, textiles, household objects, porcelain and a wealth of amusing stories all to be found in and around Doddington Hall.
• Lincoln’s International Bomber Command Centre holds the UKs tallest war memorial. At 102ft high (the same length as a Lancaster Bomber wing), it is inscribed with the names of 57,861 men and women who lost their lives in the service of Bomber Command during the second world war. The centre also contains a peace garden and the Chadwick Centre, which takes the visitor through the story of Bomber Command using interactive exhibitions.
• Battle of Britain Memorial Flight Visitor Centre has a Lancaster, five Spitfires, two Hurricanes, two Chipmunks and a Dakota.

For your tailor-made group package to this historic area, please contact our expert team on 01943 605999 or info@simplygroups.co.uk