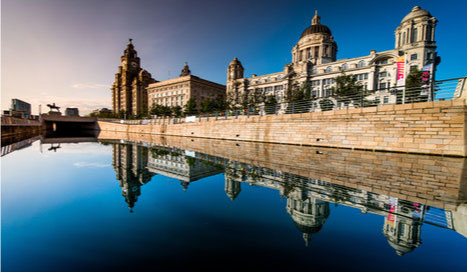 Destination of the Month - Liverpool

With unique attractions, exciting events, world class sport, unrivalled musical heritage and famously warm welcomes, Liverpool is the ideal destination to visit and explore. Culture and heritage are at the very heart of the city.

Liverpool is a city steeped in maritime history and in July 2004, Liverpool received the UNESCO World Heritage accolade as a Maritime Mercantile City, reflecting the significance of the city as a commercial port at the time of Britain’s greatest global influence. The World Heritage Site stretches along the waterfront from Albert Dock, through the Pier Head, up to Stanley Dockand through the commercial districts of the Ropewalks area to St George’s Hall. These beautiful docks and warehouses are now home to a variety of exciting shops, restaurants, exhibitions and museums.

Ferries cruise the waterfront of Liverpool, where the iconic mercantile buildings known as the ‘Three Graces’ – Royal Liver Building, Cunard Building and Port of Liverpool Building – stand on the Pier. One of the most poignant symbols of the Liverpool Blitz is the shell of St Luke’s Church, now known as ‘The Bombed Out Church’, which was hit by an incendiary bomb on 5 May 1941. The church was gutted but remained standing strong and is a stark reminder of what the city endured during this time.

Liverpool has more museums and art galleries than any UK city outside of London. The Walker Art Gallery rivals any in Europe and showcases renaissance masterpieces, Tudor portraits and one of the best collections of Victorian and Pre-Raphaelite art in the world.  The Museum of Liverpool is a modern landmark building on the iconic waterfront  and is where visitors can explore the city’s unique geography, history and culture. Spaceport is an inspirational journey through space and science. Tate Liverpool is the home of the National Collection of Modern Art in the north. The gallery stages a changing programme of special exhibitions throughout the year, which bring together artworks from all over the world. In recent years artists featured in Tate Liverpool’s special exhibitions have included Gustav Klimt, Pablo Picasso, René Magritte and Claude Monet.  At the Merseyside Maritime Museum you can explore Liverpool’s maritime heritage and take some time to learn about Liverpool’s history of slave trade at the International Slavery Museum.

Music became an escape for the people of Liverpool and in 1960, one of the Liverpool’s most famous exports was born, The Beatles. Located in the stunning Albert Dock, The  Beatles Story which tells the story of four of the city’s most famous residents who shook music and the world forever. Combine this leap into musical history with a trip on the Magical Mystery Tour which will take you to Strawberry Fields and Penny Lane.  The city became the centre of ‘The Mersey Beat’ thanks to The Cavern Club which opened in 1957.

Placed between Liverpool and North Wales is the Wirral Peninsula which is ideal for walks and  outdoor activities. One of the most beautiful areas on the Wirral is Port Sunlight.  A visit to this Museum will delve you into the unique story of why William Hesketh built this 130-acre village for the Sunlight Soap workers in 1888 and how his company formed the foundations of what Unilever is today. Port Sunlight is also home to the Lady Lever Art Gallery which has an impressive collection of the finest and most beautiful Chinese tapestries and ceramics.

Crosby Beach is a must-see on any trip to Liverpool where you can see ‘Another Place’, a sculpture creation by Anthony Gormley. Another Place consists of 100 cast-iron life size figures which are spread out along three kilometres of the shore and stretch one kilometre out to sea. This is a unique attraction well worth visiting but it is subject to tide times.

Liverpool is home to the Premier League Football Clubs Liverpool FC and Everton FC. For the football fan, take a stadium tour including a visit of an interactive museum depicting the past and present of football. The region is also home to England’s Golf Coast, with no fewer than three Royal Links courses which have hosted endless Open Championship and Ryder Cups. These include Royal Birkdale, Royal Liverpool and Wallasey Golf Club. For horse-racing, there are Aintree and Haydock racecourses where top-quality racing events are held, including the world famous Grand National Festival at Aintree each Spring.

For more information on our group holiday packages to Liverpool, Merseyside & the Wirral, contact our expert group holiday team to discuss your group’s requirements.