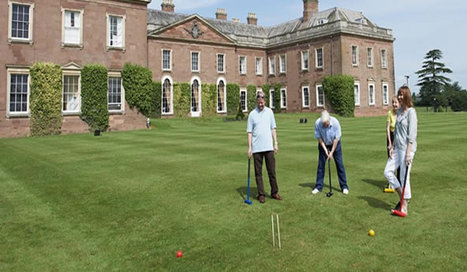 The 4* Warner Leisure Holme Lacy House Hotel is a beautiful Georgian manor house, complete with beautiful ceilings and ornate state rooms standing in 20 acres of parkland. Surrounding the main house are the formal gardens which were restored to their original design, teamed with a spacious terrace overlooking the lake and Wye Valley on your doorstep. Indoor heated swimming pool and bubble pool, steam room, sauna and fully equipped fitness studio are also at your disposal during your stay. All rooms offer 22" TV, En-suite bathroom, bright reading lights, comfy chairs toiletries, hairdryer, telephone, iron & ironing board, tea & coffee making facilities, biscuits replenished daily. The room allocation for each group will be a combination of standard bedrooms including a minimum of 10 Signature rooms with supplement.

Day 1 - Tewkesbury where time has stood still for 150 years, ensuring the preservation of its medieval character and layout. Presenting one of the best medieval townscapes in England with its fine half-timbered Tudor buildings, overhanging upper storeys and ornately carved doorways, Tewkesbury is renowned as having one of the best medieval black and white townscapes in the country. Discover the hidden charms along narrow alleyways where the eaves of crooked timber buildings nearly touch. The town is dominated by the 12th-century Abbey which is known to some as the ‘Westminster Abbey’ of the feudal barony. This beautiful building has the highest Norman tower in England as well as rich architecture and artistic heritage. Holme Lacy dinner and live entertainment.

Day 2 - City of Gloucester which has a unique history, from its Roman foundations to its Victorian docklands. Visit the National Waterways Museum housed in a Grade II listed warehouse at the heart of Gloucester's docks and its collections include objects that have been designated to be of national importance. Housed over three storeys, this museum recreates the story of the people who worked on the waterways and on the dockside. Visit the Cathedral.

Day 3 - The Cathedral City of Hereford is very well preserved, with some of its buildings dating from the seventh century. Hereford lies close to the Welsh border and therefore has played a vital role in both English and Welsh history throughout the years. It is a city of great antiquity - its magnificent Cathedral dates from 1079 and is therefore one of the oldest in Britain. The city has the highest concentration of alms houses in the country and some fine examples of medieval stone carving are found in local churches. Hereford is the home of one of the largest cider makers in the world while it is also represented in many countries by the Hereford breed of cattle. The magnificent Hereford Cathedral towers over the town. Take a moment to have a look at the stonemasons' work where the skill of these craftsmen is very evident. After exploring the cathedral you may choose to visit the Mappa Mundi, a thirteenth century map which shows Jerusalem as the centre of the world.

Day 4 - Worcester, is a University City situated on the banks of the River Severn. The Cathedral is one of England's loveliest with Royal Tombs, Medieval cloisters, an ancient crypt and Chapter House and magnificent Victorian stained glass. The Museum of Royal Worcester (entrance not included) nestles amidst the old Victorian buildings that used to be home to the Royal Worcester factory and is just a two minute walk from the Cathedral and city centre. It is proud to hold the largest collection of Worcester porcelain in the world. The Georgian, Victorian and 20th century galleries will take you on a journey through time and our informative audio tour features the factory’s history and its remarkable workforce.

Day 5 - Cirencester (often referred to as the Capital of the Cotswolds), which was the second largest town in Britain during Roman times. The market square is dominated by the cathedral-like Parish Church of St. John Baptist (one of the largest in England). The large south porch with its impressive fan vaulting was built about 1490. The town contains many interesting buildings spanning several centuries. Cirencester's market town status was mentioned in the Doomsday Book of 1086. Traders still set up their stalls every Monday and Friday and since 1999 the town has had its own farmers' market.


Simply Groups reserve the right to make minor changes to this itinerary due to circumstances beyond our control.