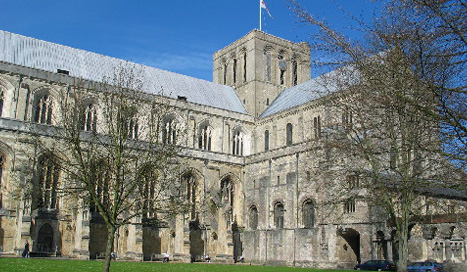 Hampshire and the New Forest

This tailor-made package includes executive coach travel throughout the holiday and from three nights’ accommodation on a half board basis at a 3* or 4* hotel in the Winchester area to suit your group’s requirements. The content of your preferred itinerary will be discussed with you at the time of enquiry.

Day 1 - Avebury (NT) has the largest stone circle in the world at the centre of a pre-historic complex in the Marlborough Downs. This circle features one of the most impressive henges in Britain as well as remains of a stone avenue.

Day 2 - Winchester and an included guided tour of Winchester Cathedral Church, so named because it houses the throne (or ‘cathedra’) of the Bishop of Winchester. It has its origins in the seventh century, when a Christian Church was first built on the site. Since then it has played a fundamental part in the life of this ancient city, and a role in our nation’s history. The Hospital of St Cross & Almshouses of Nobel Poverty are nestled in the water meadows alongside the River Itchen. Take a step back in history as you wander around the ancient medieval buildings that have provided food and shelter for hundreds of years. Winchester City Mill (NT) is located on a site used for milling flour since Saxon times. It spans the River Itchen in the heart of Winchester, once capital of late Anglo-Saxon England. King Alfred held court here in the 8th century. This visit includes a milling demonstration.
Mottisfont (NT) is situated in the heart of a tranquil rural estate, set in glorious grounds alongside the fast-flowing River Test, one of the finest chalk streams in the world and the walled gardens, house the National Collection of old-fashioned roses.

Day 3 - The Jane Austin Museum tells the story of one of the most popular and important novelists that England has ever produced. She spent the last eight years of her life at Chawton in this 17th century house, which is now preserved in her memory. It is of international importance as the place where she did the majority of her mature writing, but at the same time retains the charm of a village home. Alresford and Hinton Ampner (NT) was the vision of one man, Hinton Ampner and is best known for its magnificent garden with stunning views to the south. The elegant country house was remodeled by Ralph Dutton, the 8th and last Lord Sherborne, in 1960 after a devastating fire, and contains his collection of Georgian and Regency furniture, Italian pictures and objets d'art. The gardens were also laid out by Ralph Dutton and are widely acknowledged as a masterpiece of 20th-century design, mixing formal and informal planting, providing all year round interest. Bishop's Waltham Palace was founded in the 12th century by the bishop titled Henry of Blois, the brother of King Stephen. It is an important residence of the powerful Winchester bishops and the palace hosted many royal visitors including Henry V who prepared for the Battle of Agincourt and Mary Tudor while she waited for the arrival of her future husband, Philip II of Spain, prior to their marriage.

Day 4 - Stonehenge (EH) located in the beautiful Wiltshire countryside; the true meaning of this ancient, awe-inspiring creation has been lost in the mists of time. Was it a temple for sun worship, a healing centre, a burial site or perhaps a huge calendar? How did our ancestors manage to carry the mighty stones from so far away and then, using only the most primitive of tools, build this amazing structure? Surrounded by mystery, Stonehenge never fails to impress. The city of Salisbury is home to the awesome sight which is Salisbury Cathedral with its infamous spire. Soaring a breathtaking 123m into the sky, it is visible from every direction, dominating the landscape for many miles around. Salisbury is unique amongst medieval English cathedrals, built within one century with no substantial later additions. Many say it is the finest example of the Early English Gothic style of architecture in Britain. In the Cathedral itself you will find the best preserved of only four original Magna Carta (AD1215), the famous agreement made between King John and his barons at Runnymede, the basic principles of which have been incorporated into the constitution of the USA. There is also Europe's oldest working clock (AD1386). Arundells, Sir Edward Heath’s House was a medieval canonry in the thirteenth century and probably first used by Henry of Blunston, Archdeacon of Dorset, who died in 1316. From the mid-1550’s, the house was leased by the Dean and Chapter to lay tenants. Much of the current house's appearance is due to John Wyndham who lived there between 1718 and 1750. Arundells was renovated in the 1960’s, and refurbished by Sir Edward Heath when he came to live here in 1985. Over many years and six distinct periods of architecture, Arundells has developed into one of the finest houses inside the Cathedral Close.

Day 5 - Sandham Memorial Chapel (NT) a modest red-brick building housing an unexpected treasure, an outstanding series of large-scale paintings by acclaimed artist Stanley Spencer. Inspired by his experiences as a First World War medical orderly and soldier, and peppered with personal and unexpected details, these paintings are considered to be among his finest achievements. Basildon Park (NT) is an impressive Georgian mansion, surrounded by glorious parkland, which was lovingly rescued from ruin by Lord and Lady Iliffe in the mid 1950’s. They restored the elegant interior and scoured the country salvaging 18th-century architectural fixtures and fittings and filled their comfortable new home with fine paintings, fabrics and furniture.