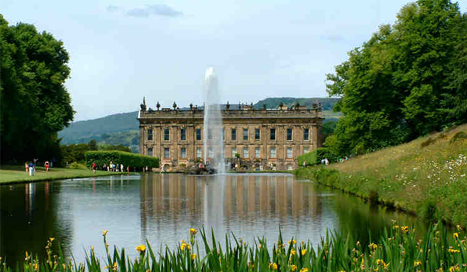 This tailor-made package includes executive coach travel throughout the holiday and from three nights’ accommodation on a half board basis at a 3* or 4* hotel in the Peak District to suit your group’s requirements. The content of your preferred itinerary will be discussed with you at the time of enquiry.

Day 1 - Canons Ashby (NT) was first built by the Dryden family during the Elizabethan period, using stone from the Augustinian priory which previously occupied the site. The private church is all that remains of the priory. The interior is welcoming and atmospheric, with Jacobean wall paintings, plasterwork and tapestries. The house was updated in the 18th century with the south-facing rooms remodelled, and again in the 19th century. The gardens are being restored to their original colourful designs.

Day 2 - Chesterfield, home to the ‘Crooked Spire’, where a traditional open air market has been going since at least 1165 when the Sheriff of Derbyshire recorded an account of £12s 7d from the market of Chesterfield. Chatsworth House & Gardens is one of Britain’s best loved historic houses and estates, which offers something for everyone to enjoy, from famous works of art and the spectacular fountains in the garden. The home of the Duke and Duchess of Devonshire is set in the magnificent landscape of Derbyshire’s Peak District National Park. Bakewell, an ancient town in the centre of the Peak District National Park was founded in Saxon times and is home to the famous Bakewell Pudding. Visitors flock here to shop and also explore its many nooks and crannies, admire its fine buildings or just relax by the clear, sparkling waters of the River Wye.

Day 3 -Cromford Mill & Village. Sir Richard Arkwright pioneered the development of his water frame spinning machine and revolutionised the manufacture of cloth, thereby laying one of the cornerstones of the Industrial Revolution. This mill is now part of the Derwent Valley World Heritage site and this area has an unrivalled collection of early cotton mills. Matlock & Matlock Bath became an instant tourist resort for the wealthy and influential when the warm springs (constant temperature of 68 degrees Fahrenheit) were discovered in 1698. The upheavals in Europe in the later part of the 18th century onwards discouraged the wealthy from making the Grand Tour and they diverted their attention to places like the Peak District. Heights of Abraham are situated on the western side of the gorge. For many years this slope was mined for lead but in the late 18th century it was developed for visitors `taking the waters`. Start with a spectacular cable car ride with superb views of the surrounding countryside. The Model Railway is a reconstruction of the Midland Railways Company tracks through the most scenic parts of the Peak District, a real mecca for rail enthusiasts. There is also an aquarium which occupies, what was once the Matlock Bath Hydro. It still contains its fine stone staircase and large thermal pool, though now the pool is home to a large collection of different types of carp. The old upstairs consulting rooms have tanks full of native, tropical and marine fish. The Hologram Gallery exhibits 3 dimensional pictures using laser technology and there is a Petrifying Well, where objects dipped into the well acquire a hard coat of lime and look as if they have been turned to stone.

Day 4 - Buxton, the cultural capital of the Peak District is a popular spa town blessed with stunning scenery, magnificent architecture, a wealth of shops and a thriving arts scene. Coupled with its world-famous spa water, Buxton has plenty to offer its visitors. Hardwick Hall (NT), one of Britain's greatest and most complete Elizabethan houses. Built by Bess of Hardwick in the 1590's and unaltered since, yet its huge windows and high ceilings make it feel strikingly modern. Outside, stone gleams and glass glitters in the light and its six towers make a dramatic skyline. It has rich tapestries, plaster friezes and alabaster fireplaces colour the rooms, culminating in the hauntingly atmospheric Long Gallery. In June/July you can see the local Derbyshire Well Dressings (also once known as well flowering). This is a custom practiced in rural England in which wells, springs or other water sources are decorated with designs created from flower petals. The construction of the well dressings is a skilful art in which frequently almost the whole population of the village is involved.

Day 5 - Crich Tramway Village, is home of the National Tramway Museum. Nestling high up in the heart of Derbyshire the Tramway Village is a lovingly restored period village. Trams run to and fro every few minutes, as visitors ride over the cobbles of the period streets, past the original facades of historic buildings from the around the country, before heading up the valley to views that will take your breath away. You even pay with an old penny you are given on entry and then you are free to ride the trams as much as you want, of which there are over 70 vintage steam, electric and horse-drawn trams from all over the world.