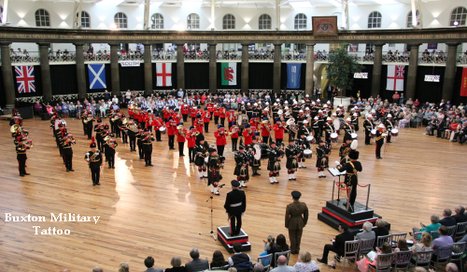 The 200 strong cast include The Band of The Household Cavalry, one of the top military bands in the United Kingdom, often providing the music for state occasions. Supporting the Household Cavalry is another prominent Army band, The Band of The Royal Logistics Corp who appear with their Corps of Drums. The nation’s Reservists are represented by The Band of The Army Medical Services. Drums and Pipes of 1st Battalion The Irish Guards promise to provide an exciting display. Cadets are represented by 2517 (Buxton) Squadron RAF Air Cadets, presenting a brand new display by their Corps of Drums and 126 (City of Derby) Squadron RAF Air Cadets Drill Display Team who perform their impressive display to contemporary music. Performances will include a spectacular Massed Bands Finale and also the Lone Piper’s lament as well as the emotive Sunset Ceremony with “Evening Hymn”. Performers may vary due to military commitments*

Examples of Excursions (You choose the ones which suit your group).
Entrances are not necessarily included in our package price

1. Guided coach tour within the picturesque Peak District National Park. Visit the infamous village of Eyam where the plague struck in 1665. Visit Eyam Hall and Craft Centre (NT), an unspoilt example of a 17th century gritstone Jacobean Manor House set within a walled garden. The Ladybower Reservoir is a must for a photo stop before travelling onward to Castleton, where the semi-precious Blue John Stone is mined. Tideswell rightly known as the 'Cathedral of the Peaks', as it is one of the largest and certainly the most perfect church in the area. Tideswell was recorded in the Domesday Book and the first known priest for the village was appointed in 1193.

2. Buxton, famed for its natural spring water and Georgian architecture. Founded by the Romans who called it Aquae Arnemetiae, the town’s rich history features Roman settlers, royal prisoners, outlaws and noble benefactors. Visitors can fill their own bottles from the permanent flow at St Anne’s Well which is located in front of the Crescent. You can also visit Poole’s Cavern with its vast limestone caverns and see how crystal stalactites and stalagmites have lined the chambers over millions of years. New LED lighting allows you to see the incredible underground world as never before.

3. Matlock Bath, a unique town nestled alongside the river Derwent in a steep and beautiful gorge. Developed as a spa town in the 19th century, it was extremely fashionable and prosperous with its spectacular scenery adding to its appeal. In 1698 three medicinal springs were discovered and soon afterwards the first ‘bath’ was constructed.

4. The Heights of Abraham first opened its gates to the public in 1780 and is now one of the Peak District's most popular destinations. The mining of this area began in Roman times, reaching its heyday in the 17th century. The miners are now long gone but in emptying the ground of the rich mineral deposits, they left behind a large network of naturally formed caverns and passageways dating back millions of years. Retrace the underground footsteps of the miners and experience the spectacular caverns they left behind. Originally the Heights of Abraham was only accessible to those few visitors who could scale the steep slopes of Masson Hill. In 1984 Britain's first alpine style cable car transport system was installed. Rising from the valley floor, the observation cars transport you in comfort and safety allowing you stunning views of the Derwent Valley and surrounding Peak District.

5. Bakewell, the only market town within the Peak District National Park boundary. Its attractive courtyards, independent shops, cafés and location on the River Wye make it a hugely popular destination for all visitors to this region. It is best known for a confection made by mistake, when in the 19th century a cook at the Rutland Arms was baking a jam tart but misunderstood the recipe and so Bakewell Pudding was created. Nowadays, almost every visitor to the town samples this culinary delight. The fine spire of All Saints Church looks down on the town, where there are some grand old houses, notably the Market Hall, The Old Town Hall and Almshouses.

6. Chatsworth House & Garden. A guided tour will provide an introduction to the house, history and its collections. The home of the Duke and Duchess of Devonshire has been passed down through 16 generations of the Cavendish family. The house architecture and collection has evolved over five centuries. There are over 30 rooms to explore, from the magnificent Painted Hall, regal State Rooms, newly restored Sketch Galleries and beautiful Sculpture Gallery. The 105 acre Chatsworth Garden has evolved over more than 450 years and continues to change today. The famous waterworks include the 300 year old Cascade, the trough waterfall in the rockery and the enormous gravity-fed Emperor fountain. As well as the huge maze, the rockery and the rose, cottage and kitchen gardens.

7. Stainsby Mill (NT) offers a vivid evocation of the workplace of a 19th-century miller. Volunteers are on hand to tell you more about Hardwick's past and present millers and you can even buy bags of freshly milled Stainsby flour! Nearby Hardwick Hall (NT) is an Elizabethan masterpiece with a stunning house and beautiful landscape created by a cast of thousands. It was the formidable Bess of Hardwick, niece to Mary Queen of Scots, who first created Hardwick in the 1500’s. Wander around Elizabethan walled garden courtyards. Although little remains of Bess's original gardens, they are still spectacular. Laid out in Elizabethan fashion, four rectangular courtyards each contain their own unique gardens, surrounded by high sandstone walls.

8. Crich Tramway Village, Home of the National Tramway Museum. Nestling high in the heart of Derbyshire overlooking the famous Derwent Valley, the Tramway Village is a lovingly restored period village which is also home to the National Tramway Museum and its world renowned archives. Trams run to and fro every few minutes, as visitors ride over the cobbles of the period streets, past the original facades of historic buildings from the around the country, before heading up the valley to views that will take your breath away. You even pay with an old penny that you are given on entry and then you are free to ride the trams as much as you want, of which there are over 70 vintage steam, electric and horse-drawn trams from all over the world.

Simply Groups reserves the right to make minor adjustments to this itinerary due to circumstances beyond our control.