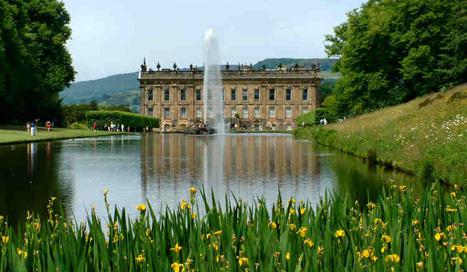 This tailor-made package includes executive coach travel throughout the holiday and from three nights’ accommodation on a half board basis at a 3* or 4* hotel in the Derbyshire / South Yorkshire areas to suit your group’s requirements. The content of your preferred itinerary will be discussed with you at the time of enquiry.

Day 1 - Sulgrave Manor is a compact manor house and a tour here is not a demanding marathon down endless corridors but a gentle stroll through three centuries of English history in the company of a friendly and informative guide. The wonderful Tudor to Georgian furniture and artefacts are displayed in their natural settings and it is also home to the largest UK collection of George Washington memorabilia.

Day 2 - South Yorkshire, the cradle of the steel industry. Magna is set within a colossal former steelworks, and echoes with the rich industrial heritage of the UK steelmaking industry. The steelworks produced 18 million tonnes of steel a year and employed 10,000 people in its heyday. The steelworks closed in 1993 but the original building has been largely preserved as a monument to its industrial heritage. Guided tours telling the human story of the steel industry are led by former steel workers and enthusiasts at regular intervals most days. Don’t miss the 'Big Melt' and its awesome re-creation of the steel-making process. Other attractions include, the awe-inspiring Winter Garden (the largest urban glasshouse in Europe) including the Millennium Galleries showcase Sheffield’s contribution to craft and design, particularly in metalwork. Walk around the Sheffield Botanical Garden. The Kew-style gardens were landscaped by Robert Marnock, a famous 19thC landscape designer. The Grade 11* listed Glass Pavilions, one of the earliest curvilinear (curved roof) glasshouses ever built, now contain a temperate plant collection from around the world.

Day 3 - Chatsworth House & Gardens is one of Britain’s best loved historic houses and estates and is  known for its famous works of art and the spectacular fountains in the garden. The home of the Duke and Duchess of Devonshire, it is set in the magnificent landscape of Derbyshire’s Peak District National Park. Matlock Bath became an instant tourist resort for the wealthy and influencial when warm springs, at a constant temperature of 68 degrees fahrenheit, were discovered in 1698. The upheavals in Europe in the later part of the 18th century onwards discouraged the wealthy from making the Grand Tour and they diverted their attention to places like the Peak District.

Day 4 - Cromford Mill & Village was Sir Richard Arkwright's first and most important cotton mill, at which he pioneered the development of his water frame spinning machine and revolutionised the manufacture of cloth, thereby laying one of the cornerstones of the Industrial Revolution. By 1840 the mill was out of date and had been overtaken by the steam-powered mills in Lancashire and the Masson Mill upstream. This mill is now part of the Derwent Valley World Heritage site and this area has an unrivalled collection of early cotton mills. Crich Tramway Village is the home of the National Tramway Museum and the village has been lovingly restored to reflect this period in British history. Trams run to and fro every few minutes, taking visitors over the cobbles of the period streets, past the original facades of historic buildings from the around the country, before heading up the valley to views that will take your breath away. Pay with an old penny you are given on entry and then you are free to ride the trams, of which there are over 70 vintage steam, electric and horse-drawn trams from all over the world.

Day 5 - Royal Crown Derby china is known and collected throughout the world and the fine traditional skills have led to an international reputation for quality and creativity. The Visitor Centre has been created to provide an insight into the traditions, the history and the skills that go into making Royal Crown Derby so special.