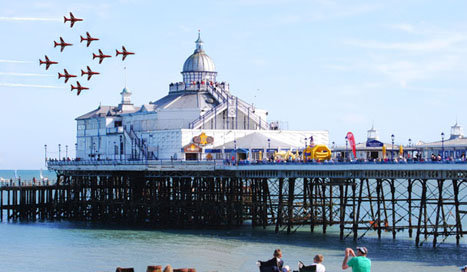 This tailor-made package includes executive coach travel throughout the holiday and from three nights’ accommodation on a half board basis at a 3* or 4* hotel in the Eastbourne area to suit your group’s requirements. The content of your preferred itinerary will be discussed with you at the time of enquiry.

Day 1 - Emmetts Garden (NT) is an Edwardian estate, owned by Frederic Lubbock, was a plants man's passion and a much-loved family home. Influenced by William Robinson, the delightful garden was laid out in the late 19th century and contains many exotic and rare trees and shrubs from across the world. Explore the rose and rock gardens, take in the spectacular views and enjoy glorious shows of spring flowers and shrubs, followed by vibrant autumn colours. Chartwell (NT) was bought by Sir Winston Churchill for its magnificent views over the Weald of Kent, This was his home and the place from which he drew inspiration from 1924 until the end of his life. The rooms remain much as they were when he lived here, with pictures, books and personal mementoes evoking the career and wide-ranging interests of this great statesman.

Day 2 - Alfriston Clergy House (NT) is a rare 14th-century Wealden 'hall house' which was the first building to be acquired by the National Trust, in 1896. The thatched, timber-framed house is in an idyllic setting, with views across the River Cuckmere and surrounded by a delightful, tranquil cottage garden featuring a magnificent Judas tree. Scotney Castle & Gardens (NT) is not one but two houses. At the top of the hill is the new house, designed by Anthony Salvin in Elizabethan style and built in 1837 for Edward Hussey III, who took the ‘Picturesque’ style as his inspiration. At the bottom of the valley are the romantic ruins of a medieval castle and moat. This is the focal point of the celebrated gardens featuring spectacular displays of rhododendrons, azaleas and kalmia in May/June with trees and shrubs providing autumnal colour. Batemans (NT) is a beautiful 17th century manor house and the home of Rudyard Kipling. 'That's She! The Only She! Make an honest woman of her – quick!' was how Rudyard Kipling and his wife, Carrie, felt the first time they saw Bateman's. Surrounded by the wooded landscape of the Sussex Weald, this house with its mullioned windows and oak beams provided a much needed sanctuary for this world-famous writer.

Day 3 - The De La Ware Pavilion. In 1933 the 9th Earl De La Warr, the socialist Mayor of Bexhill, launched an international competition for a new Pavilion for arts and entertainment on the seafront in Bexhill on Sea. This was the first major competition for a public building and Mendelsohn and his architectural partner Serge Chermayeff, beat 229 other competitors to be awarded the commission to design the new Pavilion. Charleston House was the home and country meeting place for the writers, painters and intellectuals known as the Bloomsbury Group. The interior was painted by the artists Duncan Grant and Vanessa Bell and together with their collection forms a unique example of their decorative style.

Day 4 - Eastbourne.
Wakehurst Place (NT) is the National Trust’s most visited property. It is the country estate of the Royal Botanic Gardens, Kew. This beautiful botanic garden is internationally significant, for both its collections and its vital scientific research and plant conservation. Wakehurst marked an international conservation milestone in 2010, conserving the seeds of 10 per cent of the world’s plant species for the future. Standen (NT) is a late Victorian family home brought vividly to life in this gem of the Arts and Crafts Movement. Hidden at the end of a quiet Sussex lane it has breathtaking views over the High Weald and Weirwood Reservoir. All the big names of the Arts and Crafts period are represented, including the architect Philip Webb and his friend William Morris, ceramics by William De Morgan and metalwork by W. A. S. Benson. The beautiful hillside gardens provide year-round interest.