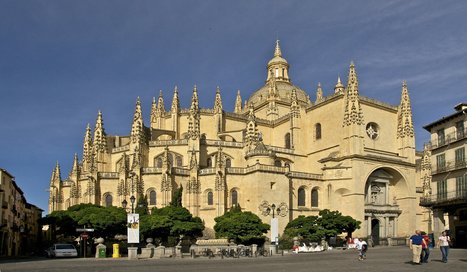 Madrid & Segovia
This tailor-made package includes return travel from the UK. Accommodation is based on from two nights’ in Segovia and 3 nights’ in Madrid staying at a 3*or 4* hotel to suit your group’s requirements. The content of your preferred itinerary will be discussed with you at the time of enquiry.

Day 1 - Travelling from the UK to Spain by way of your preferred mode of transport.

Day 2 - Guided tour of The World Heritage Site of the city of Segovia with its narrow streets and beautiful mansions which is best known for its Roman churches, two tier aqueduct built circa 50AD and its 16th century cathedral and plaza. Guided tour of the Alcazar de Segovia - Spain's most famous castle, rumoured to be the inspiration behind Cinderella's Castle in Walt Disney World. Visit to Avila surrounded by the finest preserved medieval walls in Europe, protecting its beautiful palaces and churches for a guided walking tour of the Old Town which was founded in the 11th century to protect the Spanish territories from the Moors.

Day 3 - Guided tour both by coach and on foot of Madrid discovering some of the history of the city and details of its famous residents - Don Quijote and Sancho Panza. From the remains of the old Arab wall, to small Gothic churches and early Renaissance works, Madrid boasts a multitude of rich and varied works of art. The area of "Los Austrias"–, along with the Plaza Mayor square, have a number of beautiful sites, churches and convents. The austere Baroque façades contrast with the luxurious interiors of the palaces. The 18th century left a Neo-Classical imprint, with the Royal Palace, Sabatini Gardens, and Campo del Moro Gardens, which are in the city centre. The church of San Francisco El Grande, the fountains in the Paseo del Prado, the Puente de Toledo bridge, the Prado Museum and the Puerta de Alcalá Arch are also in the Neoclassical style. Madrid's more modern and avant-garde areas are the two avenues in the new urban expansion area –the Gran Vía and Paseo de la Castellana. Following your tour you will have free time to explore at your leisure before checking into your hotel later this afternoon, where you will be based for 3 nights.

Day 4 - Visit to Aranjuez, one of the Royal Sites of the Spanish monarchy since Philip II appointed it in 1560 and known as Royal Place and Villa de Aranjuez. It is famous for its Royal Palace and Gardens its orchards of strawberries and asparagus and was declared a World Heritage Site by UNESCO in 2001. The palace's most distinctive feature is the predominance of white and red on its façade. The building we see today is the result of modifications made by Charles III, who added a large parade ground. The Gardens, known as the Island Garden, are an open and well maintained space with a water channel and a many fountains. Board the Chiquitren (tourist train) to travel around the Princes Garden. Here you will see beautiful landscapes and fountains, ancient trees over 30m tall from all over the world and fairy-tale pools.This train makes two stops during the route: The Royal Barge Museum where you can see the recreational boats used by the kings and queens for navigating on the Tagus and secondly the Casa del Labrador, which is reached along an impressive avenue of magnolia trees. A 45 minute river cruise along the River Tagus gives perfect views of the Prince’s Gardens and other wonders such as the Royal Pier at the Casa del Labrador.

Day 5 - Free time in Madrid this morning. Afternoon excursion to the historic city of Toledo, the famous “city of the three cultures”, declared a World Heritage Site by the UNESCO which still has exactly the same layout as it had in the Middle Ages. A guided walking tour of its narrow streets reveals an incredible and living monumental site, both inside and out. A must see is Toledo Cathedral ranked amongst the greatest Gothic structures in Europe. Inside, the cathedral contains important masterpieces including a spectacular baroque high altar and two paintings by El Greco. The El Greco Museum which is home to works of art by the artist it is named after, of which the most exceptional are a magnificent apostolate, the ‘view and map of the town of Toledo’ and ‘The Tears of San Pedro’. The museum is completed by paintings by Luis Tristán, Murillo, Valdés Leal and other artists. Return to Madrid later this evening.

Day 6 - Returning to the UK by your preferred mode of transport.
With all packages we supply a tailor-made flyer to assist in the promotion of your group holiday, along with a booking form which provides us with all the details we require from each participant.