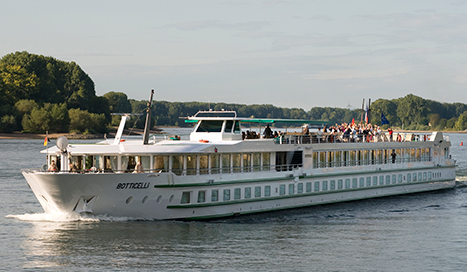 This tailor-made 4* cruise package includes 5 nights accommodation on a full board basis with ‘All Inclusive’ drinks. Entertainment is included on board most evenings. The itinerary content and mode of transport of your choice will be discussed at the time of enquiry.

Day 1 - PARIS
Embarkation of this cruise is in Paris. Welcome cocktail and presentation of the crew. Dinner included.

Day 2 - PARIS - LES ANDELYS - HONFLEUR
Visit the Martainville Château, the sumptuous second home of a 15th century banker. The château was built at the end of the XVth century, and bought by the State in 1906 and turned into a museum in 1961. Learn about 500 years of rural Normandy history. Travel to the heart of Norman traditions (work costumes, head-dresses, jewellery, clothes), reliving the past thanks to the objects from everyday life (copper pans, pottery, baskets). Discover the largest collection of Upper Normandy furniture, the ‘FAMOUS NORMAN ARMOIRES’.

Day 3 - HONFLEUR
A guided walking tour of Honfleur allows you to discover the Saint Catherine Church, the Granaries for storing salt and also the Saint Leonard Church. Travel by coach to the ‘Côte d'Albâtre’ (Alabaster Coast), classified as a Natura 2000 site since 2009 where you can discover the natural heritage of the Pays de Caux and the Seine estuary. Pass the high cliffs of white chalk and stone beaches popularised by the paintings of Claude Monet, the suspended valleys of the little coastal rivers, the Normandy Bridge, Etretat and Fécamp. Stop at Etretat, once a fishing village it was transformed into a seaside resort in the XIX century and became a place of inspiration for artists, and famous people (including the Queens of Spain and J. Bonaparte). The town has several remarkable chateaus, manor houses and villas including the Manoir de la Salamandre, The Clos Lupin and the Château des Aygues, which were the seaside residences of the Spanish Queens Marie-Christine and Isabelle II. Fécamp  is labelled a  ‘Town and Country of Art and History’ and is known for its Benedictine liqueur. The abbey church of Sainte-Trinité, the Palace of the Dukes of Normandy and the rich collections in the Museum of Terre Neuvas are witness to its prestigious history. Alternatively, the D-Day Landing Beaches saw one of the great turning points of the 20th century during the landings of the Allied Forces in Normandy. Visit Pointe du Hoc the scene of one of the landings on June 6th 1944, pass alongside Omaha Beach and Colleville-sur-Mer and the American cemetery. Lunch is included lunch before continuing on to Arromanches, the site of the famous battle which had an artificial port installed to allow the invasion of land troops and their equipment. Stop at Arromanches 360° where you can watch a moving film in the round cinema. Named the Price of Liberty it combines archived footage filmed in June 1944 by war correspondents with current images on the same site.  Return to Honfleur via Gold Beach, Juno Beach and Sword Beach.

Day 4 - HONFLEUR - CAUDEBEC-EN-CAUX - ROUEN
Guided tour discovering the ‘Route des Abbayes’. See majestic abbeys which highlight the wealth of the Duchy of Normandy during the Middle-Ages. Begin with a visit of Jumièges Abbey built in 654 when Christianity arrived in the region and was subsequently destroyed by the Vikings. Restored in the 11th century by their descendants, the abbey became extremely well-known, thanks to Victor Hugo who described it as the “most beautiful ruin in all of France”.  You will also see the cloisters and the ruins of the Church of Saint Peter before visiting either the Abbey of Saint Wandrille or Wandregisel (exterior only). This is a spiritual location of great importance where the magnificent classical architecture blends with the magnificence of mediaeval heritage. A Guided Walking tour of Rouen or a tour by Petit Train will show the cathedral, the historic districts and the Place du Vieux Marché. Enjoy free time afterwards to explore further before returning to the ship where this evening you will enjoy a Gala Dinner.

Day 5 - ROUEN - PARIS
Enjoy a Panoramic Coach Tour of Paris, as with your guide you discover the mythical sites of the capital. Since being founded, two thousand years of history have seen ecclesiastics, sovereigns and heads of state leave their mark on the city, building churches, erecting monuments and palaces, creating prestigious museums, outlining sumptuous perspectives. Paris has a reputation for taste and elegance owed in part to its couturiers, perfumers and jewellers. You may like to book a ‘Paris by night’ cruise as a memorable way of finishing this cruise or explore the city by night at your leisure.

* The cruise ship offered will be based on availability and dates of travel.*