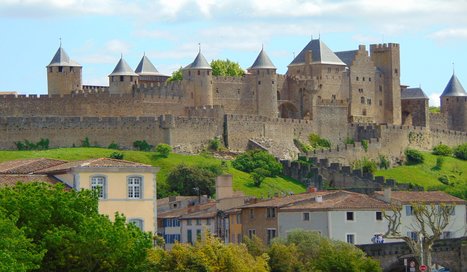 This tailor-made package includes a minimum 3* hotel in the Languedoc region, suitable for your group’s requirements. The content of your preferred itinerary will be discussed with you at the time of enquiry.

• Our suggested itinerary could include:

Day 1 – Arriving in the Languedoc-Roussillon region and check-in at your hotel.

Day 2 – Today is dedicated to exploring some of the Haut-Languedoc Regional Nature Park.
Roquebrun - is a charming small town in an attractive setting on the River Orb, known locally as the Nice of Herault and best known for its Mediterranean garden which contains an impressive selection of plants and offers superb views over the village.
Minerve is rated as one of the 'most beautiful villages of France'. This fortified medieval village is perched on a naturally defended rocky peninsula, high above a canyon in the barren Languedoc landscape.
Olargues is also classified as one of the 'most beautiful villages of France. Situated on the banks of the small Jaur river the paved streets of the village meander uphill past many of the stone houses which have impressive stone doorways and decoration

Day 3 – Carcassonne – A guided walking tour is a superb introduction to this interesting and impressive medieval town, whose history dates back to the Cathar Wars. Carcassonne is divided into the fortified Cité de Carcassonne and the more extensive lower city. The medieval town was originally a collection of ramshackle buildings huddled around a fortified castle, known as La Cité, which is listed as a UNESCO list of World Heritage Site. A walk along the battlements provides wonderful views of the town of Carcassonne and the flat plains of the Languedoc. Included is a visit to The Basilica of St Nazaire the ‘Jewel of the City’, whose stained glass windows are the most beautiful in the Midi. Visit the 12th-century Chateau Comtal which houses a museum with an extensive collection of artefacts excavated over the years. The afternoon is free to explore at your leisure.

Day 4 – Narbonne was once the capital of the first Roman colony in Gaul and today is a City of Art and History with many historic buildings. Accompanied by your guide, enjoy a stroll through the medieval streets where you will see the Basilica of Saint-Paul before visiting the rich collections of the Palace-Museum of the Archbishops. Continuing on to the nearby Abbey of Fontfroide you will discover the abbey, the rose garden and terraced gardens before continuing on to Terra Vinea. Climb on-board Express Terra Vinéa for a virtual ride through the Languedoc and the largest subterranean wine warehouse in the South of France. Watch a spectacular ‘son et lumière’ show before plunging into the subterranean cathedral for a tour covering the history of wine making in the Romans’ footsteps with a reproduction of a Gallo-Roman villa, and the Middle Ages with a medieval scene and the reproduction of a tavern. In these subterranean galleries, discover museums providing a rich insight into the history of wine making and winemakers, ancient tools, blacksmith’s workshop, cooper’s workshop, miners’ gallery. Your visit here will include a tasting of the wines before returning to your hotel.

Day 5 – Aigues Morte whose name literally means ‘dead-water’ a reference to the semi-stagnant salt water marshes which made the town profitable from sea-salt production. Today, the salt works stretch over 9,800 hectares (nearly 24,000 acres) of the Camargue region. During a guided walking tour of the old fortified town whose massive town walls took more than 30 years to build, you will explore the narrow streets steeped in character and history, dating to King Louis IX. Today, it is also known for the ‘bull runs’ through the town, held annually in August.
This afternoon, join a Camargue boat trip. This rare habitat is famous for flamingos and also its own horse breed, the famous white Camarguais. Discover the local fauna and flora before making a stop in the heart of the marshlands at a manade where you will see the sorting of bulls by the ‘guardians’ on horseback.

Day 6 – Montpellier and the old town of Écusson. See the Carré Sainte Anne, a renovated church that now houses art exhibitions throughout the year. Another must-see for art lovers is the celebrated Musée Fabre, one of Montpellier’s most-visited sights. Montpellier has so many sights outside of the old town an example being the Cathédrale St-Pierre which borders the old town which was converted into a cathedral in 1536. Adjacent is the Faculty of Medicine, housed in the former cloister of the monastery of Saint-Benoît. The botanical garden Jardin des plantes de Montpellier is also well worth a visit, being one of the oldest botanical gardens in France. Montpellier’s Arc de Triomphe, also known as Port du Peyrou was the entrance to the Royal Palace and was built as a dedication to King Louis XIV, the ‘Sun King’. Walk up the imposing promenade to the water tower Château d’eau which was built at the same time as Montpellier’s aqueduct in the 18th-century to distribute water from the River Lez.
This afternoon we visit the Flaugergues Chateau & Garden which includes a Heritage & Wine Tour. One third of the château is taken up by a staircase of rare elegance which has a unique design. It also houses important 18th-century furniture, 17th-century Flemish tapestries and a collection of high-quality porcelain and earthenware. Enjoy a leisurely stroll through the gardens and conclude your visit with a wine tasting accompanied by a local delicacy.

Day 7 – Nimes – joined by a local guide you will visit some of the Roman remains and the attractive old town. The Maison Carrée is one of the best preserved Roman temples and the mighty Arena is one of three large Roman arenas in the south of France. Apart from these two major monuments of classical antiquity, Nimes has several other Roman attractions including the Temple of Diana and Tour Magne, as well as the imposing Pont du Gard, the highest Roman aqueduct bridge. Nimes also has an attractive and well preserved historic centre with narrow streets and tree-lined boulevards, typical of the south of France. You will return to the UK by your preferred mode of transport.

Simply Groups reserves the right to make minor adjustments to this itinerary due to circumstances beyond our control.