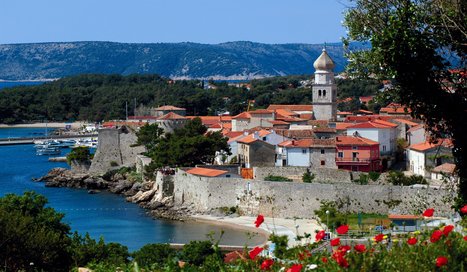 Destination of the Month - Croatia

DISCOVER CROATIA - For those in search of history and culture, city destinations such as Zagreb, Dubrovnik, Split and Zadar offer Roman, Byzantine, Venetian and Austro-Hungarian monuments. The historic centres of Dubrovnik and Split are UNESCO World Heritage Sites, as are the cathedrals in Trogir and Sibenik and the basilica in Porec. While Croatia’s rocky stretch of Adriatic does not have the long sandy beaches found in Greece and Spain, it is astoundingly beautiful with numerous small pebble coves backed by pinewoods and crystal-clear turquoise sea.  This combination of timeless unspoilt nature coupled with beautifully preserved centuries-old architecture and a lively contemporary cultural scene, promises rewarding memories.

•  Dubrovnik’s Walls – The briefest of walks round the battlements is a breath taking introduction.

•  The Premuzic Trail – A most exhilarating long-distance hiking route with outstanding views.

•  Rovinj – Riviera town chic collides with fishing port charm in the most Italinate of coastal resorts.

•  Hvar, the Island – Beautifully unspoiled and pitted with a wealth of bays and coves.

We work closely with KATARINA LINE, a premier small ship cruise company which has weekly guaranteed departures from the end of April to mid-October departing from the major tourist centres of Opatija, Split and Dubrovnik. With a fleet of more than 50 ships in four different categories, this cruise line caters to all ages and budgets. Itineraries allow exploration of the stunning natural environment and picturesque & quaint Mediterranean towns, while hopping from one island to another. This unique way of travelling and exploring coastal towns is one of the most popular and easy ways to experience the true Croatia.

OF SPECIAL INTEREST are deluxe cruises conducted on the new and lavishly designed deluxe vessels providing more comfort and style, whilst including various extra services including sightseeing tours, wine tastings and excursions, all carefully selected to create a unique experience of Croatia from the sea.

LAND & CRUISE PROGRAMMES offer a variety of tours allowing you to experience the ‘true Croatia’ combining the inland nature and the rich history on land with island hopping by boat around the quaint coastal towns.

DUBROVNIK is a city in southern Croatia fronting the Adriatic Sea. A walled, sea-battered city lying at the foot of a rugged mountain and is Croatia’s most popular tourist destination. An essentially medieval town reshaped by Baroque planners after a disastrous earthquake of 1667, Dubrovnik’s historic core has been suspended in time.  Churches and public buildings blend seamlessly with green-shuttered stone houses, forming a perfect ensemble relatively untouched by the 21st Century. Paved with limestone, the pedestrianised man street is lined with shops and restaurants.  The Baroque Dubrovnik Cathedral has multi-panel paintings by renowned Venetian artist Titian as well as more than 200 gold and silver relics from the 11th–18th centuries. Outside the city walls, suburban Dubrovnik exudes Mediterranean elegance: gardens are an explosion of colourful bougainvillea and oleanders and trees are weighted down with figs, lemons, oranges and peaches.

ZAGREB is Croatia’s north western capital and is distinguished by its 18th and 19th Century Austro-Hungarian architecture. At its centre is the site of the Gothic, twin-spired Zagreb Cathedral and 13th-century St. Mark’s Church with its colourful tiled roof. Nearby is pedestrian-friendly street, lined with outdoor cafes. The Croatian National Theatre, an opulent neo-baroque landmark, is a venue for drama, opera and ballet as well as an annual international theatre festival. Zagreb is home to many museums and galleries, such as the Museum of Contemporary Art, the Mimara Museum featuring artworks by European masters and the Croatian Museum of Naïve Art which is housed in an old mansion.

PLITVICE LAKES NATIONAL PARK is a 295sqkm forest reserve in central Croatia. It is known for a chain of 16 terraced lakes, joined by waterfalls which extend into a limestone canyon. Walkways and hiking trails wind around and across the water connecting the upper and lower lakes by the Lake Kozjak ferry.

SPLIT is atown on Croatia’s Dalmatian Coast which is known for its beaches and the fortress like complex at its centre, the Diocletian's Palace which was erected by the Roman Emperor in the 4th century. Once the home of thousands, its sprawling remains include more than 200 buildings. Within its white stone walls and under its courtyards are a cathedral, numerous shops, bars, cafes, hotels and houses.  The Riva is Split’s modern seafront promenade, lined with palm trees and restaurants and the Gallery of Fine Arts houses works by major Croatian artists.

ZADAR ison Croatia’s Dalmatian coast and is known for its Roman and Venetian ruins in the Old Town. There are several Venetian gates in the city walls. Surrounding the Roman-era Forum is  the 11th Century St. Mary’s Convent with religious art dating to the 8th Century. Other historic buildings are the grand, 12th Century St. Anastasia’s Cathedral and the round 9th Century pre-Romanesque Church.  The Riva, or seaside promenade, is popular for strolling and sunset viewing. The Sea Organ, which looks like steps descending into the sea, is an enormous musical instrument played by the movement of wind and water; the Sun Salutation is another Old Town installation by the same artist, Nikola Bašić.

The ARKRKA NATIONAL PARK is situated in the south of the country along the River Krka  and is known for a series of 7 waterfalls. Skradinski Buk waterfall is flanked by traditional watermills whilst to the north, a nature trail passes another striking cascade, Roški Slap and the Krka Monastery which is built above ancient Roman catacombs. Visovac Island is home to the 15th Century Franciscan Monastery of Our Lady of Mercy whilst the Archaeological Museum presents an extensive collection of artefacts from the city’s long and tumultuous history. Just offshore Kornati Islands National Park offers sailing, diving and snorkelling.

PULA is a seafront city on the tip of Croatia’s Istrian Peninsula and has a protected harbour, beach-lined coast and Roman ruins. Settled in the prehistoric era and valued for its strategic location, Pula has been occupied, destroyed and rebuilt numerous times. The Romans, Ostrogoths and Venetians, as well as the Allied Forces in World War II, have each administered the city.  The vast Roman Pula Arena, constructed in the 1st Century is still used for events today. Other notable landmarks are the Arch of the Sergii from around 29 B.C. and the Porta Gemina, once part of the city’s fortifications, marking its main entrance. The Pula Cathedral dates to the 5th Century and has even older foundations. Off shore are a group of islands and the Brijuni National Park, which has dinosaur footprints, Roman ruins and a golf course.

HVAR is anisland in the Adriatic Sea and is best known as a summer resort. Highlights of the port town include its 13th Century walls, a hilltop fortress and a main square anchored by the Renaissance-era Cathedral. The island also features beaches and inland lavender fields. Boat excursions serve the nearby Pakleni Islands, which have secluded beaches and coves.

ROVINJ is a Croatian fishing port on the west coast of the Istrian peninsula. The old town stands on a headland and its houses are tightly packed right to the seafront. A tangle of cobbled streets leads to the hilltop church of St. Euphemia, whose towering steeple dominates the skyline. The Rovinj Archipelago’s 14 islands lie immediately off the mainland.

POREC is a popular summer resort on the coast of Istria. In the historic old town, the 6th Century Euphrasian Basilica complex is famous for its gem-studded Byzantine mosaics. The coastline north and south of town draws visitors to its marinas and beaches with water sports. Some 6km inland, the Baredine Cave is notable for its stalactite formations.

TROGIR is an historic town and harbour on the Adriatic coast in Split-Dalmatia County and is situated on a small island between the Croatian mainland and the island of Čiovo. It lies 27 kilometres west of the city of Split and since 1997 the historic centre has been included in the UNESCO list of World Heritage Sites.

Croatia is a country of diversities appealing to all ages, whether it is the beach, history, architecture, cuisine, wine, walking or just relaxation, Croatia has something for everyone.

FOR MORE INFORMATION ON THIS DESTINATION, or to REQUEST A BESPOKE GROUP HOLIDAY QUOTATION, contact our ‘EXPERT’ sales team who will ASSIST with your enquiry.