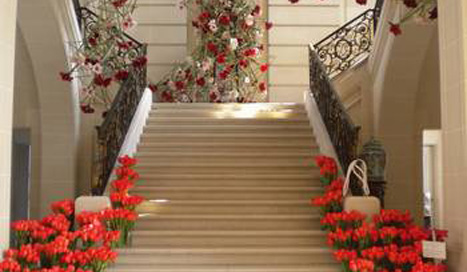 The Amaryllis Festival Of Beloeil

Day 1 - The historic town of Ypres was originally a small Flemish market town. In 1914, the outbreak of WWI, the town of Ypres was the scene of some of the worst fighting of the war and Ypres was described as being, all the horrors of the Somme and the hell of Verdun. The consequences were drastic with 500,000 dead in an area of 25 square kilometres and after the war; Ypres became one of the most important European memorials. You will have the opportunity of seeing the Menin Gate, where every evening at 8pm up to six members of the regular buglers from the local volunteer Fire Brigade step into the roadway under the memorial arch. They play the Last Post, followed by a short silence and then play Reveille. The Menin Gate is inscribed with the names of more than 54,000 soldiers who died in the Great War, who have no known graves.

Day 2 - The flower exhibition at the Chateau and Gardens of Grand-Bigard is an unforgettable floral experience. The park, approx 14 hectares, incorporates nearly all spring bulb varieties and the castles’ gardeners have planted by hand, under the direction of specialists from The Netherlands, more than 1 million bulbs. During the four weeks in which the exhibitiontakes place flower lovers will have the opportunity to change every week where approximately 120 creations, reflecting the trends and current fashions, will be presented in a beautiful indoor garden.  Waterloo with a guided visit of the Wellington Museum. Before the battle, this house used to be an Inn and The Duke of Wellington installed his headquarters in this building a few days before the battle took place. It is now a museum where visitors can see personal memories of Wellington and other heroes of the battle, uniforms, weapons and detailed maps of the battlefield. The Lion Mound Hamlet is located at the heart of the battlefield, on the frontline where French and English troops met. It was built after the battle around the Lion Mound, the main monument commemorating the battle. The Waterloo Battlefield has been preserved almost as it was in 1815 and you can learn about the course of this great battle in European history, which pitted Napoleon’s troops against those of Wellington and Blücher.

Day 3 - The UNESCO site of the Boat lifts of the Canal du Centre. This visit starts with a tour of the engine room after which you will board the boat for a cruise on the canal to Strépy-Thieu. You will travel through the old hydraulic lift and then pass through the lock at Thieu. You will see the contrast to this old mode of boat lift as you take the new giant boat lift, which elevates you 50m above the existing canal system. The Distillerie of Biercee is unique in Belgium! Here you will discover the secrets of distillation and how 10 kg of fresh fruit are transformed into one bottle of eau-de-vie or liqueur. You will see the Distiller’s room with its collection of ancient stills, tools and old books and see a video presentation.

Day 4 - The annual Amaryllis Festival at the Chateau of Beloeil, known as the Versailles of Belgium. Each year for the last 25 years, the Amaryllis exhibition delights visitors and floral art fans from around Europe. The Princes de Ligne open the doors of their house to 3500 flowers originating from the famous Dutch florist of 'Leo Berbee & Zonen'.  Great artists create beautiful flower designs within the wondrous setting of the castle. A guided tour is included of this vast stately house, home of the Princes de Ligne, which began life as a medieval fortress. Over the course of centuries it has been transformed into a country home and Antoine de Ligne began laying out the grounds which surround the castle, as early as 1515. Departing here mid-afternoon we return to Calais and once back in the UK, you will be returned to your original departure points during the evening.