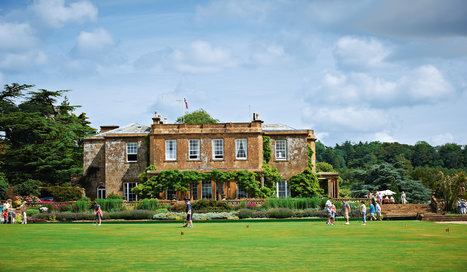 Day 1 - Bristol take a guided tour of Brunel’s SS Great Britain (payable locally) which has covered a million miles. She has sailed to New York & Melbourne, been run aground, rescued, sold, carried troops to the Crimean War and seen her most famous captain (John Gray), start and mysteriously end his career, all before Bell invented the telephone in 1876. The SS Great Britain, retired in 1933 and in 1937, in what looked like a bleak ending to her working life, she was scuttled in the Falkland Islands. When the world wars broke out she was a coal supply for battleships, iron plates from her hull were used to repair HMS Exeter and her timbers were used to make souvenirs and sold to raise funds for Spitfires.

Or alternatively World Heritage Site of Stonehenge (EH). The true meaning of this ancient, awe-inspiring creation has been lost in the mists of time. Was Stonehenge a temple for sun worship, a healing centre, a burial site or perhaps a huge calendar? Surrounded by mystery, Stonehenge never fails to impress. We also visit the cathedral city of Salisbury. Salisbury is unique amongst medieval English cathedrals having been built in just 38 years (1220 - 1258) in a single architectural style, early English Gothic. The tower and spire (Britain's tallest) were added about 50 years later. The Market Place has seen regular markets since 1227, and it used to be sprinkled with crosses which were centres for selling particular kinds of produce. Nowadays only the Poultry Cross remains. The Market Square was the scene of the execution of the Duke of Buckingham in 1483. The Duke, in hiding from Richard III, was betrayed when a labourer noticed extra food being delivered to his hiding place. Cricket St Thomas dinner and live entertainment are included this evening.

Day 2 - ‘Jurassic Coast’ which achieved World Heritage Site status because of the unique insight it provides into the Earth Sciences. This spectacular coastline clearly depicts a geological ‘walk through time' spanning the Triassic, Jurassic and Cretaceous periods. Begin at Lyme Regis where the cliffs are 200 million years old and mark the start of the Jurassic Coast. The old town dates back to the 14th century and is an ideal place to explore the local shops, art galleries, newly replanted gardens with a myriad of places to stop for refreshments. Built round the river Lym, Lyme has its own working water mill, recently refurbished to include an electricity generator. The Cobb attracts visitors – not just for its visual splendour and its magnificent naval architecture, but also for its connections with great literature. Abbotsbury Tropical Gardens (payable locally) were established in 1765 by the first Countess of Ilchester as a kitchen garden for her nearby castle. Developed since then into a magnificent 20 acre garden filled with rare and exotic plants from all over the world, many of these plants were first introductions to this country, discovered by the plant hunting descendants of the Countess. Weymouth, visit Brewers Quay where amid the labyrinth of paved courtyards and cobbled streets of this redeveloped Victorian brewery, nestles a unique Shopping Village packed with specialist shops and attractions. Set within the historic Hope Square, alive with cafes, bars and bistros, Brewers Quay offers a unique experience for all ages. The 17th century town’s waterfront is steeped in history with links to the Black Death, Spanish Armada, the Civil War & D Day Landings. Athelhampton House (extra cost), one of the finest 15th century manor-houses surrounded by one of the great architectural gardens of England. The house contains many finely furnished rooms including The Great Hall, Great Chamber & Wine cellar. The Gallery in the west wing exhibits works by the Russian artist Marevna who lived at the house in the 1940’s/50’s. The Grade I Listed garden dating from circa 1891, is full of vistas and gains much from the fountains and River Piddle flowing through.

Day 3 - A private tour of Cothelstone Manor, gives you access to a house not otherwise open to the public. You will hear about the history of the Manor and church from its beginnings in 1066 through the turbulence of the English Civil War to its renaissance in the nineteenth century. At the end of the tour we include a light lunch. Help yourself to sandwiches and cake from the kitchen and take a seat, as you would if you lived in the manor. Street, the home of Clark’s Shoes and the Clark’s Outlet Shopping Village. The shopping complex offers over 90 stores offering huge savings everyday on a fantastic range of designer labels and famous brands. If you love great brands, but dislike high street prices, Clarks Village is the place for you. Wells, which is a city like no other in Britain. There is the great Gothic Cathedral and Cathedral Green which is the centre piece for a complex of buildings and streets, equally old and fascinating, including the moated and walled Bishop’s Palace with its 14 acres of gardens & Vicars Close. We return to the hotel where dinner and entertainment is included this evening.

Day 4 - Take advantage of the facilities available to you at  Warner's Cricket St Thomas. Play lord and lady of the manor with an afternoon tea. Or of course, you could just stroll through the magnificent lakes and gardens (weather permitting) take a dip in the pool or treat yourself to some TLC in the leisure club. Dinner and entertainment.
Day 5 - Sherborne in Dorset, one of the most beautiful towns in England. With its abundance of medieval buildings, superb Abbey, picturesque Almshouse and two Castles, it has much to offer visitors. City of Bath, explore this unique city with its hot springs Roman Baths, splendid Abbey and where its Georgian stone crescents have attracted visitors for centuries. Don’t miss the Royal Crescent and the Circus, Queen Square, Abbey Churchyard, Abbey Green or the Cross Bath tucked away down Bath Street. The extensive remains and a Roman museum of international significance lie beneath the Pump Room and Abbey Church Yard in the centre of Bath. Also worth visiting are the Assembly Rooms (NT) which were popular in the fashionable Georgian society. There is also the Fashion Museum on the lower ground floor. (Entrances are all payable locally).