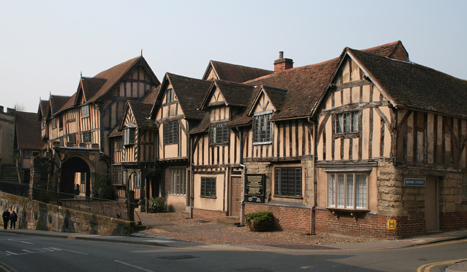 Shakespeare Country And The Cotswolds

This tailor-made package includes executive coach travel throughout the holiday and from three nights’ accommodation on a half board basis at a 3* or 4* hotel in the Cotswolds to suit your group’s requirements. The content of your preferred itinerary will be discussed with you at the time of enquiry.

Day 1 - Sulgrave Manor with a guided visit. This is not a demanding marathon down endless corridors but a gentle stroll through three centuries of English history in the company of a friendly and informative guide. The wonderful Tudor to Georgian furniture and artefacts are displayed in their natural settings with only the most delicate behind glass. It is also home to the largest UK collection of George Washington memorabilia demonstrating the British contribution to the origins of the USA with a separate exhibition on George's life and career in the US. Baddesley Clinton (NT) is an atmospheric house which dates from the 15th century and was the home of the Ferrer’s family for 500 years. The house and interiors reflect its heyday in the Elizabethan era, when it was a haven for persecuted Catholics – there are three priest's holes. There is a delightful garden with stew ponds and a romantic lake and nature walk.

Day 2 - A full day coach tour through some of the most picturesque villages and countryside in the Cotswolds. Essential places on any itinerary are Bourton-on-the-Water, Broadway and the ancient wool town of Stow-on-the-Wold. Bourton-on-the-Water is often referred to as the ‘Venice of the Cotswolds’ because the River Windrush which runs right through the centre. The combination of this clear sparkling water and the attractive low bridges crossing it create a charming scene. Stow on- the-Wold is the highest settlement in the Cotswolds at 800 feet, situated between the valleys of the Dickler and the Evenlode. Stow's large market square is a gem - the focus of most activity in the town. The surrounding houses, shops and inns, in mellow Cotswold stone, represent a pleasing blend of styles, mainly from the 17th and 18th centuries.

Day 3 - In historic Stratford-upon-Avon, start with a cruise on the river Avon, a pleasant way of introducing the town to you. After this cruise, you will have some free time and might choose to walk in William Shakespeare's footsteps and visit or see Shakespeare’s Birthplace, Nash's House, the site of New Place, Hall's Croft or even see where William Shakespeare is buried in the Chancel, where there is a curse on his grave. Discover the American connections, a 'hidden garden' and see the amazing bronze sculptures representing Shakespeare's plays - 'The Tempest', 'King Lear', 'A Midsummer Night's Dream' and many more'. Warwick & The Lord Leycester Hospital which is not now and has never been a medical establishment. The Hospital is an historic group of timber-framed buildings dating mainly from the late 14th Century clustered round the Norman gateway into Warwick with its 12th Century Chantry Chapel above it. Hidden behind the ancient buildings is the tiny but delightful Master's Garden. For nearly 200 years it was the home of Warwick's medieval Guilds and in the reign of Queen Elizabeth I, it became a place of retirement for old warriors and their wives. The Queen’s Own Hussars Museum covers over 300 years of service of the senior light cavalry regiment of the British Army and the lives of a few individuals have been chosen to bring to life each era. A chronology board relates the regimental and military events to other national and local historical events. An audio-visual experience shows the part played by the Regiment at great cost in the in the closing stages of the Battle of El Alamein.

Day 4 - At the Black Country Living Museum discover a fascinating world when you visit this urban heritage park in the shadow of Dudley Castle at the heart of the Black Country. Historic buildings from all around the Black Country have been moved and authentically rebuilt at the Museum, to create a tribute to the traditional skills and enterprise of the people that once lived in the heart of industrial Britain. Visitors are transported back in time from the modern exhibition halls to the canal-side village, where costumed demonstrators and working craftsmen bring the buildings to life with their local knowledge, practical skills and unique Black Country humour.

Day 5 - Royal Leamington Spa was originally known as Leamington Priors and was a tiny village until about 1800. The value of the mineral springs was known in the middle ages, but it was not until 1784 that the small village began rediscovering its saline springs and started building baths around some of them. Waddesdon Manor (NT) was built (1874-89) by Baron Ferdinand de Rothschild to entertain his guests and display his vast collection of 18th-century French decorative arts. The furniture, Savonnerie carpets and Sèvres porcelain rank in importance with those in the Louvre in Paris and the Royal and Wallace Collections in London. There is also a fine collection of portraits by Gainsborough and Reynolds, and works by Dutch and Flemish Masters of the 17th century. The Victorian gardens are considered one of the finest in Britain and famous for the parterre, seasonal displays, shady walks and views, fountains and statuary.