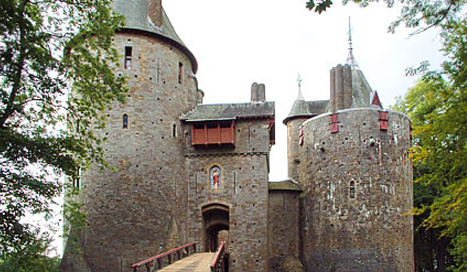 This tailor-made package includes executive coach travel throughout the holiday and from three nights’ accommodation on a half board basis at a 3* or 4* hotel in South Wales to suit your group’s requirements. The content of your preferred itinerary will be discussed with you at the time of enquiry.

Day 1 - Tyntesfield (NT) is a Victorian country house and estate, situated on a ridge overlooking the Yeo Valley which was inspired and remodelled by John Norton in 1864, for William Gibbs, a successful merchant. The mansion, a Gothic Revival extravaganza, bristling with towers and turrets, survives with its original Victorian interior intact, a collection of Victorian decorative arts, an insight into life below stairs and a sumptuously decorated private Chapel. It is surrounded by 200ha of landscaped gardens, kitchen gardens, park, farmland and estate buildings which include a home farm and sawmill.  Castell Coch is a late nineteenth-century 'fairytale'-style castle, built on medieval remains, designed for the third marquess of Bute by William Burges. Lavishly decorated and furnished in the Victorian Gothic style it is a romantic vision of the Middle Ages.

Day 2 - St Fagans and the Welsh National History Museum is one of Europe's foremost open–air museums and Wales most popular heritage attraction. It stands in the grounds of the magnificent St Fagans Castle, a late 16th-century manor house donated to the people of Wales by the Earl of Plymouth.  During the last fifty years, over forty original buildings from different historical periods have been re-erected in the 100-acre parkland. These include houses, a farm, a school, a chapel and a splendid Workmen's Institute. There are also workshops where craftsmen still demonstrate their traditional skills. Llandaff Cathedral is the home of Jacob Epstein’s stunning ‘Christ in Majesty’. This magnificent building is most definitely worth a visit due to its spectacular interior. The Cathedral, unlike most churches, is not named after a saint but after its parish and is situated on one of the oldest Christian sites in the British Isles. The current building was erected during the Victorian era and is now a handsome sight.

Day 3 - Cardiff rich culture has a diverse range of influences, from the Romans & Normans to the industrial revolution and the coal industry - which transformed Cardiff from a small town into a thriving international city. After going into decline in the 70's and 80's, Cardiff's docks and city centre have now been regenerated. Cardiff Bay is now a thriving waterside development, and the construction of the Millennium Stadium in the city centre helped transformed Cardiff into a true European capital city. At the National Museum see the stunning Davies Sisters’ collection. Gwendoline Davies (1882-1951) and Margaret Davies (1884-1963), two sisters from mid-Wales, amassed one of the great British art collections of the 20th century. Together, they bequeathed 260 works to the National Museum of Wales in 1951 and 1963, completely transforming its art collection in character, quality and range. The Norwegian Church, a former Norwegian Sailors’ Church, is one of the landmark buildings situated in Cardiff Bay and has panoramic views over the waterfront and fresh water lake.  The Centre, managed by the Cardiff Harbour Authority, provides a unique visitor attraction and receives some 200,000 visitors a year since it opened in 1992.  A guided tour of the Millennium Centre details what lies beneath the mystical inscription, see one of the biggest stages in Britain & drop in on a dressing room. Accompanied by a guide discover the red brick Pierhead Building, was once the Bute Dock Company, and is now a Grade 1 Listed building built in 1897 and which now houses the Visitor Centre for the Welsh Assembly. The famous Cardiff Bay Barrage took 5 years to complete and its construction started in 1994. It creates a freshwater inland lake from the Taff and Ely rivers and extends 13km along the waterfront of Cardiff bay. The "working part" consist of 3 locks and bascule bridges for boats to enter or leave and five sluice gates to regulate water levels in the bay.

Day 4  - Llancaiach Fawr Manor lies in a peaceful and rural setting and the house belies the violence of its early years. Today it is a Living History Museum where you step back in time and enter the Manor restored and furnished as it was in 1645, when local allegiances changed from King to Parliament and occupied by 17th century servants who welcome visitors and guide them around. The Big Pit National Coal museum is located near Blaenafon, a town that played a vital part in the Industrial Revolution. You will visit the original Big Pit colliery buildings around the site, including the Fan House, Blacksmith's Forge, Stables and Winding Engine House. The Pithead Baths have been restored to enable visitors to see where each colliery shift began and ended and the Bath's building has an exhibition telling the stories of the people who worked within the mining industry.

Day 5 - Cardiff Castle guided tour. Discover 2000 years of history in the heart of the city from the arrival of the Romans, through the Norman Conquest to lavish Victorian design − all have left their distinctive mark on the Castle. Dyrham Park (NT) is a fine William and Mary house, set in 265 acres of ancient deer park and was built between 1691 and 1702 for William Blathwayt, William III's Secretary of State and at War. Rooms have changed little since they were furnished by Blathwayt in the Dutch style, Delft China, Dutch Paintings, and fine 17th Century textiles and the domestic's rooms from the 1840's are also open to the public.