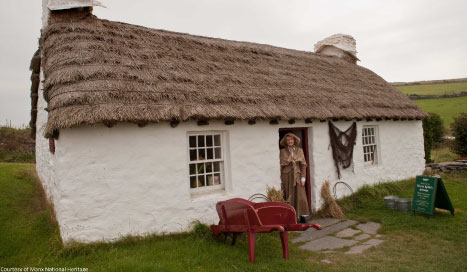 Situated between the coastlines of England, Scotland, Ireland and Wales, in the middle of the Irish Sea, is the beautiful Isle of Man. Blessed with an extensive coastline, stunning natural landscapes, unspoiled beaches and plenty of character, this is a perfect holiday destination. With more than 40% of the land being unpopulated and uncultivated the Island can be described as a natural garden. Discover the ever-changing Manx landscape of rolling hills and costal scenery by visiting some of the Island’s best beauty spots. There are 18 national glens, both coastal and mountainous, many of which lead to the sea. The Island may only measure 33 miles in length and 13 miles in width but it has much to offer. There are also a number of smaller Islands located off the coast including the Calf of Man at the southern tip, which is home to a nature reserve and bird observatory. It has also long been recognised for having ‘dark night skies’, a valued attribute of the rural character and tranquility of the Island.

Exploration & Guided Walks  -  As well as a variety of trails, active tracks and glens the Island offers a series of guided walks to suit all interests. A visit to The Sound in the south offers excellent views of the Calf of Man nature reserve and bird observatory and of the seals basking on the rocks in the surrounding water.

Culture & Heritage - Fiercely proud of its diverse culture and fascinating heritage this sea-bound kingdom has a captivating story to tell which stretches back for thousands of years. Legend has it that the Island’s name comes from the Celtic sea god Manannan Mac Lir who protected the land from invaders by shrouding it in a cloak of mist. It is these folklore stories, which are carefully safeguarded by the Manx people, to ensure the Island does not lose any of its unique charm of character. A visit to the Isle of Man is a voyage of discovery where you can explore Celtic crosses and ancient Viking burial grounds as well as a number of heritage landmarks which tell the Story of Mann. The Isle of Man’s strong identity is due in part to its independence and the fact that the Island is self-governing. It has the oldest continuous parliament in the world, Tynwald, which dates back over 1,000 years. Visit the Tynwald Building and Tynwald Hill where parliament meets in the ‘open air’ once a year. A visit to the Isle of Man really is a fascinating and unique experience!

Heritage Attractions - Discover more than 10,000 years of history and step back in time as you journey around some of the Island’s most important heritage sites. The Isle of Man has a unique and varied heritage which is as evident today as it was many thousands of years ago. Uncover the Island’s fascinating past by following the Story of Mann trail which will guide you around ancient castles, forts and sites of religious and political importance. Visit one of Europe’s best preserved medieval castles, Castle Rushen which tells how the Kings and Lords of Mann lived, or Peel Castle in the west, following in the footsteps of Christian missionaries and Viking warriors. There is also the opportunity to find out what life was like for fishermen, crofters and miners by visiting the world’s largest working Waterwheel in Laxey which used to pump water to the mines, or the remote village of Cregneash which today is a living, working illustration of life in a typical 19th century Manx upland crofting community.

Museums - The Isle of Man has an impressive collection of museums. Whether you want to find out more about the Isle of Man’s culture and heritage, aviation and transport history or the role it played in the First and Second World Wars, there is a museum to suit. The Manx Museum in Douglas is a fascinating place to start your journey around the Island. Here is the beginning of the Story of Mann Trail as well as a national art gallery with artwork from various famous artists. In Peel, the mythical sea god Manannan will guide you through the House of Manannan which focuses on the island’s rich Celtic, Viking and maritime past. Transport enthusiasts will find an Aladdin’s cave of historic transport memorabilia at the Jurby Transport Museum and the Manx Heritage Transport Museum, which is home to the world’s smallest road legal car, the Peel P50. Learn about the island’s involvement in the First and Second World Wars at the Aviation Museum in Castletown and the Leece Museum in Peel, which tell the story of the internment camps that were located in the Island.

Towns & Villages - Explore the many charming towns and villages and discover a wide range of things to see and do. The Island’s capital, Douglas is a great place to begin. As well as being the main shopping area it is the starting point of the Steam Railway and Manx Electric Railway, which lead south and north respectively. The Story of Mann Trail starts here and will act as your guide to the heritage attractions located around the Island. Visit the ancient cobbled streets of Castletown which is home to one of Europe’s most preserved Medieval castles whilst Peel and Port Erin on the west coast, have glorious sandy beaches, sheltered bays and the chance to spot basking sharks and seals. No trip to either is complete without a creamy Manx ice cream! For those who enjoy exploring outdoors, take advantage of the fantastic walking trails in and around Port St Mary. Wherever you choose to visit you are guaranteed a warm Manx welcome.

Things to See & Do - Discover Victorian heritage railways and quirky traditional events to non-stop action packed adventures and wildlife watching throughout the year. If you fancy journeying back in time, then hop on to one of the Island’s heritage railways. You can head north on the Manx Electric Railway, south on the Steam Railway, take a relaxing Douglas Horse Tram along the seafront or enjoy the scenery from the Snaefell Mountain Railway, the only mountain railway in the British Isles.

Local Delicacies - For seafood lovers, try traditional Manx Kippers which are herring fillets that have been smoked over hot oak chips, or Manx Queen Scallops - Queenies as they are more commonly known - which are sustainably sourced from Manx waters. If you prefer meat there is a large selection to choose from including the rich and tasty Loaghtan Lamb, which comes from an unusual horned sheep believed to have been brought to the Island by the Vikings.

*National Trust and English Heritage Card Holders are permitted free entry to the many Manx National Heritage properties around the island.