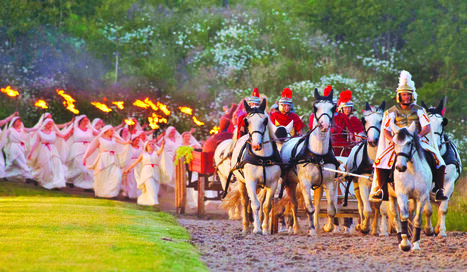 The 4* Maldron Hotel Newcastle is situated in Newcastle City Centre, a prime location with all of the city’s attractions on the doorstep. It has a restaurant and bar and all rooms come with a desk, flat-screen TV, tea/coffee making facilities, an ensuite bathroom with complimentary toiletries + free Wi-fi

Friday Day 1 -Travelling north a stop will be made at Hardwick Hall (NT). This Elizabethan masterpiece with stunning house and beautiful landscape was created by a cast of thousands and was the home of the formidable Bess of Hardwick, niece to Mary Queen of Scots, who first created Hardwick in the 1500’s. Wander around Elizabethan walled garden courtyards. Although little remains of Bess's original gardens, they are still spectacular. Laid out in Elizabethan fashion, four rectangular courtyards each contain their own unique gardens, surrounded by high sandstone walls. Lunch can be purchased here before continuing north to Newcastle + hotel dinner.


Saturday Day 2 - Breakfast included. Today begins in Newcastle with an included 1 hour Quay to City river cruise which offers a snapshot of the city, taking in the '7 bridges'. This is an ideal way of experiencing the city from the river with recorded commentary. There will be free time afterwards to explore the City at your own pace before returning to the hotel for an early dinner. Departing by coach a photo stop will be made at the iconic Angel of the North, which is as much a part of Gateshead's identity as the Statue of Liberty is to New York. Since it first spread its wings in February 1998, it has become one of the most talked about and recognisable pieces of public art ever produced. In 1990 this site, a former colliery pithead baths, was re-claimed and earmarked for a future sculpture. When sculptor Antony Gormley was selected as the winning artist in 1994, his designs originally caused uproar.
Continuing on to Bishop Auckland, the highlight of this tour is an evening performance of Kynren, a spectacular live action ‘outdoor theatre show’ held on a seven-and-a-half acre stage. One thousand cast and crew tell the 2,000-year tale & the history of England bringing to life a ground-shaking story of invasions, royal splendour, wars, heroic sacrifice, daily life and seismic change. Take your seat with around 8,000 others and be swept along by a thrilling journey. Two thousand years in the making: dazzling pyrotechnics, beautiful choreography, amazing stunts and hard-to-believe horsemanship, combine with an inspired original soundtrack. Late return to the hotel.


Sunday Day 3 - Breakfast included. Today we head north to the village of Bamburgh where we begin with an included visit to Bamburgh Castle, once home to the Kings of ancient Northumbria and one of Northumberland's most iconic buildings. The castle we see today is a relatively recent structure, built by famed industrialist the first Lord Armstrong at vast cost in late Victorian times. During its more recent history, Bamburgh Castle feted royal guests and English kings, one of whom - Edward IV - destroyed it in the Wars of the Roses. Lord Armstrong's restoration saved it from ruin and the castle provides an ancestral home to the Armstrong family to this day.
Next we visit Alnwick Garden where lunch can be purchased. This garden was the vision of the Duchess of Northumberland who wanted to create a beautiful public space accessible to everyone. Adrian Fisher the world's leading maze designer, Caroline Holmes a renowned figure in the horticultural world and William Pye a celebrated water sculptor, combined their talents to create stunning features within the Garden. Entrance into the ‘Poison garden’ is also included after which the afternoon will be free to explore at your leisure. Returning to the hotel your evening meal is included.


Monday Day 4 - Breakfast included. Today begins with an included visit to the famous Bowes Museum, a magnificent French château created in the late 19th-century by John and Joséphine Bowes. A volounteer guide will introduce you to the museum and its internationally renowned collections of European fine and decorative arts spanning five centuries. The permanent collections comprise works by artists such as Canaletto, El Greco, Courbet and Turner, and contain one of Britain’s most extensive collections of ceramics, including Italian majolica and Sèvres porcelain. The iconic 18th Century Silver Swan, a musical automaton, is one of the highlights of a visit here.
This afternoon’s included visit is to Beamish, Britain’s favourite ‘open air museum’. Set in over 300 hundred acres of beautiful countryside, this museum vividly recreates life in the North of England in the early 1800’s and 1900’s. This attraction demonstrates the recent history of the region in a ’living’ way and provides entertainment and education for all ages and interests. Hotel dinner included.


Tuesday Day 5 - Checking out of our hotel after breakfast, we retrace our steps making a stop at the Wentworth Garden Centre in South Yorkshire. This hidden gem is set within 16 acres of historic walled and landscaped gardens – entrance included. Explore the beautifully restored 19th-century walled gardens complete with pools, cascades, yew maze and follies. Lunch can be purchased here before continuing homeward, returning you to your original departure point(s) later today.