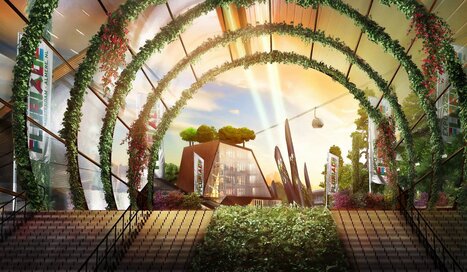 
1. International Horticultural Expo Floriade 2022 in Almere. Once every 10 years the Floriade hosts an event renowned for the scent and colours of flowers, plants and fruit. It also offers 40 inspiring country presentations, a spectacular greenhouse complex, a cable car over the Floriade park, pavilions with sustainable innovations and a vibrant arts and culture programme.


2. Het Loo Palace & Gardens. The Palace of Het Loo reflects the historical ties between the House of Orange-Nassau and the Netherlands. The central part of the palace and the lateral pavilions show how the palace was inhabited by the House of Orange for three centuries starting with the King Stadtholder William III up to and including Queen Wilhelmina. It has a Dutch baroque garden with rich decoration, which was made by William and Mary, who later held the English throne. Visitors have often called Het Loo 'the Versailles of Holland', because of its axial layout, fountains, parterres and statues.
3. The Airborne Museum Oosterbeek housed in Villa Hartenstein is a villa with a long history. In September 1944, this building which began as an inn in 1728, was the headquarters of the British Airborne Troops under the command of General-Major Roy E. Urquhart. There are several exhibitions throughout this muesum one of which is the Airborne Experience, where you will follow in the footsteps of a British parachutist. After an introduction movie you will see and hear the complete story by following the museum route where you are briefed on a mission onboard a glider. Through its windows you can see it taking off from England and flying to the occupied Netherlands. In the permanent exhibition you are told what happened from day to day during the Battle of Arnhem, from the aerial landings on the heathland to the evacuation on the Rhine. By means of photographs, texts, objects and audiovisual material you discover what the military and civilians experienced in September 1944.


4. Guided Tour of Utrecht - An endearing city with a cosy, warm and dynamic atmosphere. With Roman churches, medieval wharves, the magnificent Gothic Dom and a number of museums, including the Musical Dutch Organ Museum, the Catharijne Convent, the Railway Museum and the Rietveld Schroderhuis listed as a UNESCO World Heritage Site, there is something for everyone.


5. Castle de Haar & Gardens is the largest and most luxurious castle in the Netherlands. It has everything you expect from a castle; towers, turrets, moats, gates and suspension bridges. The castle is also home to many art objects. Next to the castle is a romantic chapel and beautiful parks and gardens.


6. Ghent is an undiscovered Flemish jewel which boasts an opera house, a handful of museums, ancient churches and countless bridges which span the two rivers that wind themselves through the city. Find a seat on the Graslei, a scenic canal spot in the centre of town, with a great view on the many bridges, grand houses, bridges & medieval buildings. Explore the Patershol district with its small labyrinth of charming cobblestone streets, the towering Gravensteen Castle and UNESCO recognised Bell Tower.
All quotes are subject to availability at the time of confirmation.
Simply Groups reserve the right to make minor changes to the itinerary due to circumstances beyond our control.